Partial to a walking sim? These are the best indie games on PC.

Celebrating the launch of the Landmark Edition, an engine-port marking the game’s debut on consoles, and an upcoming free update for owners of the original PC version, The Chinese Room recently took to the stage in a one-off appearance at the Barbican’s Milton Court Concert Hall. With live music, narration, and gameplay, whether Dear Esther is a ‘real game’ or not is thankfully irrelevant. Dear Esther is now part-concert, part-performance… and perhaps the most extravagant Let’s Play around.

With the game projected on an enormous screen above the stage (at 60fps, you’ll be relieved to know), the game’s writer and producer, Dan Pinchbeck, walks the audience through Dear Esther’s bleak world. In our recent interview, Pinchbeck explained that “it doesn’t matter if you don’t understand it [Dear Esther] or it doesn’t matter if you ‘get’ it. It’s not a problem to be solved, it’s just a thing to be in for a while.”

Strangely, this walkthrough doesn’t seem interested in emulating the authenticity required to give you the sense of “I’m here”. Instead of naturally moving through the world, Pinchbeck spends his time deliberately panning over the landscapes, stopping to showcase picturesque scenes. In some cases, he takes long pauses to simply stare at objects that are perhaps relevant to the game’s metaphor-filled narration. It’s a slightly self-indulgent attempt at cinema; it feels less “I’m here”, but more “Here’s this.” 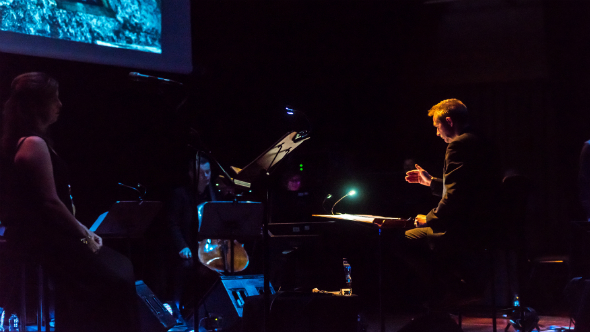 While an entirely cinematic approach may have been viable, a playthrough attempting to tread the line between cinema and real-time play is too imperfect to deliver the immersive experience that Dear Esther hinges so heavily on. Typical gamey elements like catching yourself on a piece of geometry or turning the camera at inconsistent speeds go unnoticed when you’re in control, but as a spectator, these are a constant reminder that you’re simply watching someone play a videogame. The few moments where the game takes control of the camera are the most impactful, leaving me wondering whether a programmed flythrough may have been more effective.

Thankfully, the game is very literally a backdrop to the events on stage. Behind the mic this evening, in place of the game’s original narrator, Nigel Carrington, is Oliver Dimsdale – the lead actor in The Chinese Room’s latest effort, Everybody’s Gone to the Rapture. Carrington’s original performance was exceptionally sombre, matching the visuals, and nailing the most poetic moments. Dimsdale’s delivery is less dramatic and rehearsed – a good thing, mind you – resulting in the game’s most intimate sections landing much more convincingly than they originally did. Where Carrington slips into audiobook territory, Dimsdale remains strikingly human. 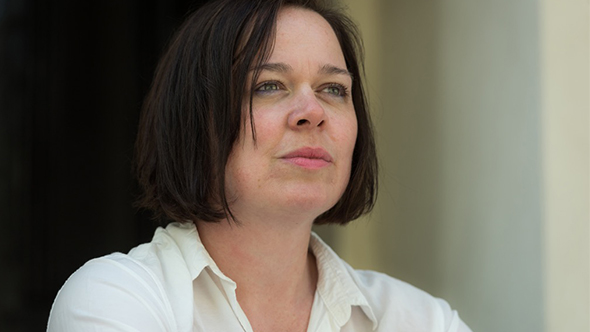 The undoubted highlight, however, is the wonderful rendition of Jessica Curry’s award-winning score. Performed flawlessly by the ensemble on stage, the wonderful string-heavy pieces fill the hall with ease. As the music swells and vocalist Joanna Forbes L’Estrange’s ethereal tones ring out next to Dimsdale’s most powerful line reads, it’s clear that this is the backbone of both the game and this event.

While this live performance of Dear Esther is certainly a captivating celebration of Pinchbeck’s writing and Jessica Curry’s magnificent composition, it’s hard not to feel as though it misses the point of what makes Dear Esther – and so many other successes within the ‘walking simulator’ genre – so special. Videogames are unique in their ability to craft worlds in which players can lose themselves, and casting this core component aside makes it clear just how essential it is to the medium in the first place.

But at least that’s one question answered. Dear Esther is not a play, but it’s still a damn fine game.