BTs in Death Stranding are by far the most terrifying thing about the game, more so than Norman Reedus’ bloody feet or never being able to drink anything but Monster Energy… alas, if you want to progress the story you’re going to have to go to town on a few of them, especially if you want plenty of precious chiral crystals to upgrade structures and purchase equipment with. In this guide we’re going to show you how to kill, avoid, or escape BTs in Death Stranding, from how to approach the monsters, to what equipment you need to gain the upper hand.

What are BTs in Death Stranding? In Death Stranding, BTs or Beached Things is kind of a blanket term for all of the afterlife monsters in the game. It’s best to know what you’re dealing with and the different phases of a BT combat sequence. You’ll know you’re in BT territory when you see Timefall, which is the rain that makes Sam’s hood go up involuntarily. The game will play an animation where you’ll hear your Odradek (the scanner on your shoulder) chirping and pointing at something as time slows down. You’ll know it when you see it. This is the cue to say that BTs are lurking. If you don’t hold your breath or use your Odradek (more on that later) you’ll encounter see-through floating humanoid beasts around you attached to umbilical cords. If they spot you, gooey hands will rush towards you on the ground, and humanoids will rise from the ectoplasm and try to ruin your stamina and pull you under.

If you get caught in this phase, the ground around you will turn into black goo and a proper BT Boss will be summoned. These are the flailing whales or lion-esque creatures seen in trailers. That’s when the real battle begins.

How to avoid BTs in Death Stranding

To avoid summoning a BT boss in Death Stranding, you want to control your breathing. If your stamina bar drops too low, you’ll take a massive breath and alert everyone. You also want to to crouch and lurk around the area at all times.

There’s also the Odradek, the scanner on your shoulder. Watch the direction it’s pointing and how hard it flashes, as this will denote where the nearest BT is so you can avoid it.

How to kill BTs in Death Stranding

Before you approach a BT in Death Stranding, make sure you’ve got the necessary kit. In the early game, you’ll unlock Hematic Grenades which contain Sam’s blood. These are the best way to take down BTs, as they explode, covering them in red mist and damaging their health bar. You can fabricate these at a station. When you’re throwing them, hold down the aiming trigger to create a more precise reticle which will power up your shot. As always, aim for the head (or gold mask, if there is one.)

Outside of blood, you can also turn your poop and pee into biological weapons because this is Death Stranding, baby. To pick up EX Grenades, hit the shower in your private room and head to the toilet (both sitting and standing) to stock the cupboards with bodily fluid bombs.

EX grenades don’t actually hurt BTs, they just pacify them, so use them to calm BTs down when they’re flailing and looking to cause you trouble, then hit them with a few Hematics. You can also summon another player’s ghost from the ectoplasm, who will throw you Blood Bags and extra grenades that can save you when you’re in a bind. Once you kill a BT in Death Stranding you’ll receive chiral crystals, a very useful resource. 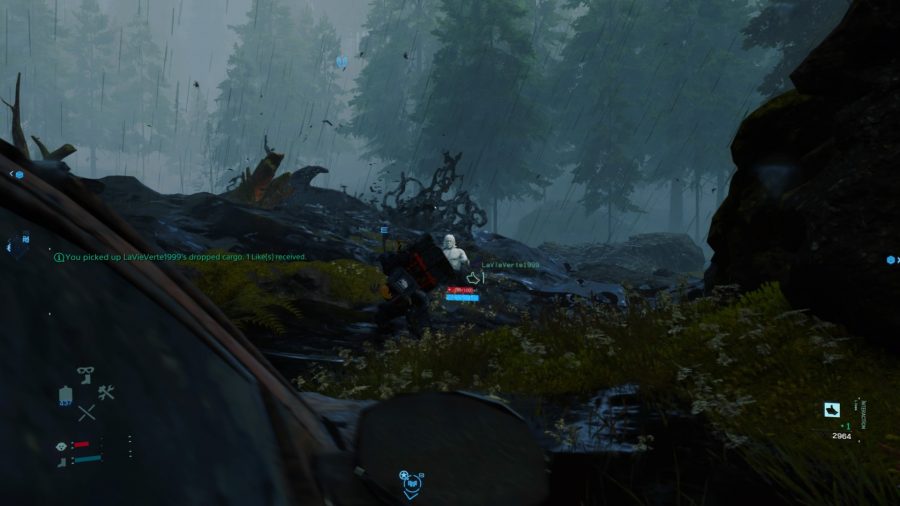 How to escape BTs in Death Stranding

If all else fails, you can always run. In the phase prior to the BT boss when the gooey gang are trying to pull you under, leap towards salvation, which is just outside of the area covered in black goo. Be sure to keep yourself steady, and if they surround you bat them away from Sam.

You can also do this after summoning a BT boss, by running and leaping away from the battle arena. It’s tricky (if you get caught you’ll trigger a void out and leave a semi-permanent crater in the map) but it’s worth it if you can’t take the fight. Use the buildings that rise from the ground to get out of the goo and get an advantage.

Once you’re out of there, the sky will clear and you’ll get a thumbs up from your Odradek. You won’t get any chiral crystals, but BB will reward you for being safe, and its affection is worth more than money, surely? If you’re not in a position to take the fight against BTs in Death Stranding, the best advice is to just avoid it.