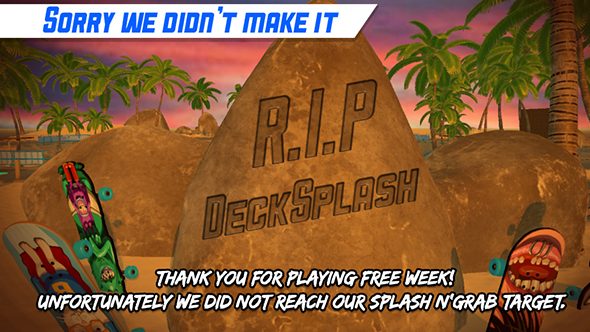 Bossa Studios, best known for their bizarre sandboxes like Surgeon Simulator and I Am Bread, announced a free week for their competitive skateboarder Decksplash. But there was a substantial caveat: if Decksplash couldn’t attract over 100,000 players during that week, they’d quit development on it.

Competition for players is fierce among multiplayer games. Here’s the current top dogs.

That free week has come and gone, and Decksplash failed to meet its player goals. So now it’s gone. Based on SteamSpy, it seems the game attracted about 36,000 people during its free week, and SteamCharts show a peak concurrent player count of 464, with an average of 73.

“The Free Week proved what we suspected at the start,” say Bossa Studios in their official announcement. “Decksplash is a good game, evidenced by its 79-86 Steam score throughout the week. The players who experienced the game liked it, but in the end there just wasn’t enough of them to guarantee a healthy online community and keep the game’s matchmaking alive for the long run.”

They’re taking a pragmatic approach to the news. “The lesson to take home is that, though not the best, this outcome is a good one for everyone involved: its players won’t spend money on a game that won’t survive the long haul, the team can move on to a new Bossa project with a sense of closure having done their best with Decksplash, and we tried a new way of validating a multiplayer game.”

Bossa iterate on hundreds of games a year during their internal game jams, and Decksplash was just one of those many potential products. Among the other projects they have going now are sandbox builder Worlds Adrift, and a new co-op action game directed by former Valve writer Chet Faliszek.

Original Story, October 28:Developing and launching a game is a risky enough proposition, but for an indie studio to release amultiplayergame is fraught with danger. We’ve seen so many smaller online games launch, find zero players and die out.

Bossa Studios (I Am Bread, Surgeon Simulator) are hedging their bets. Unless their upcoming online skateboarding gameDecksplashcan draw 100,000 players during a free event next week, they’ll be cancelling development.

Bossa have been surprisingly up-front about the seriousness of this decision, with Matt ‘Malford’ Alford, QA director (and lone QA tester, so… not a very big division to direct) produced a video explaining why they’re taking this approach.

As questionable as the decision may initially seem – it’s undeniably at least part marketing stunt – there is a certain pragmatism to it. A multiplayer game will live or die based solely on how many people are playing it, and if a well-known studio like Bossa can’t draw the crowds, then there’s not much point investing further time in development.

They’re not holding the full, polished game hostage here, but rather making an early decision as to whether it’s viable to continue work on it in as Early Access.

Personally, I’m going to be one of the players trying it out during the free week. I’ve always had a soft spot for the earlier Tony Hawk’s Pro Skater games, and Decksplash looks like it blends that with equal parts Rocket League and Splatoon. Two games fully deserving to be referenced more often.

Decksplash’s free week begins on Steam on November 2nd, and if at least 100,000 players try it before the 10th, they’ll be launching it onto Early Access as a paid, commercial title.