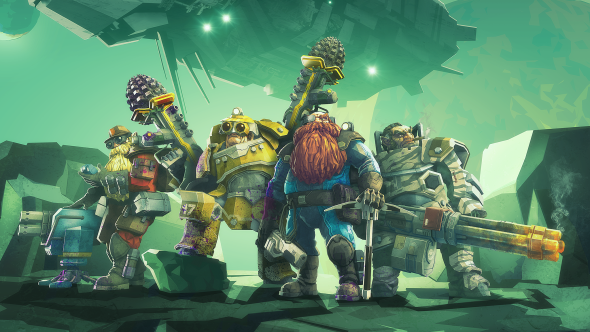 Since its conception, Deep Rock Galactic has been an easy sell: the procedural exploration of Minecraft spliced with the co-op action of Left 4 Dead.

“When we started talking about it, people latched onto it,” art director Robert Friis tells us. “And here we are.”

Developers Ghost Ship Games have wound up with a gleefully entertaining game about dwarven space mining. But there are a few missing steps in Friis’s concise version of events, and delivering on that initial sell has not always been straightforward. 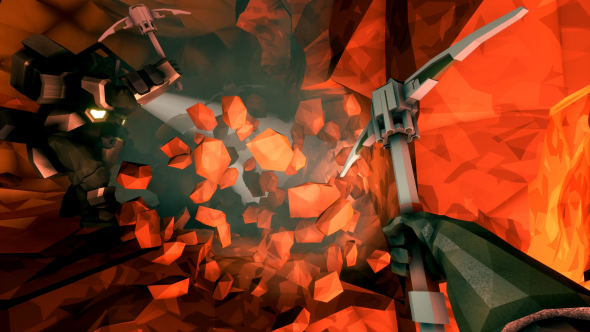 Like Minecraft before it, Deep Rock Galactic needed a tool that could procedurally generate a level every time you logged into a game – something nobody on the team had any experience with. Ghost Ship Games’ first prototype was a safe copy of Minecraft’s block-based world generation. Being stripped of the scale of Mojang’s landscapes it turned out to be relatively simple to build.

“Unreal Engine 4 is by far the best engine I have worked with,” lead programmer Jonas Møller says. “We got a lot out of the box – really solid character control that is networked.”

“You boot it up and things just look and feel good already, so it was very easy for us to have a working prototype up and running,” Friis adds. “I can mock things up and have them on screen without interrupting a programmer.”

Once the team began running graphics tests, they became more ambitious – piling detail on top of those blocks until, eventually, it no longer made sense for them to be blocks at all.

“‘How would this look if it didn’t have a Minecraft feel to it – not blocky, but angled 3D shapes?’,” Friis asked at the time. “We liked that, and the programmers went nuts and made something even better.”

CTO Henrik Edwards came up with a plan for “true mesh-carving” – where static meshes are the basic unit used to make world geometry in Unreal Engine 4. The combination of these two ideas is what gives Deep Rock Galactic its distinctive look, as dwarves smash shards off of faceted gemstone, building organic pathways through alien cave networks. 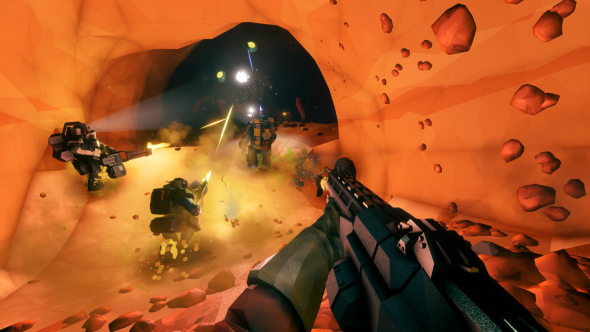 A game of Deep Rock Galactic has an overall curve to it: it begins with the descent, during which you and your fellow miners dig up the necessary resources to meet your work order. Once that quota has been filled, the countdown is triggered, and you battle upward to the extraction pod. As it turns out, even the structure of the caves works to support the overall momentum of the mission.

“At first we tried to do true procedural, where the computer generates everything,” Møller explains. “But then I had the idea to put up some simple shapes manually and generate the level out of that. That way you could build a simple room, create the game design, and then the engine would skin it.” 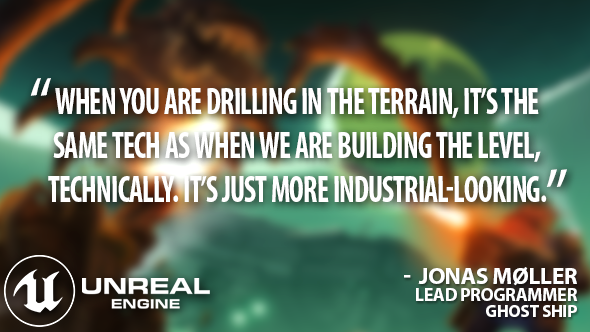 The geography of a Deep Rock Galactic level governs its difficulty, too, with deeper networks far trickier to traverse and escape from than shallow caves. Despite the control Ghost Ship Games have over their levels, however, they still have the capacity to surprise.

“The most spectacular ones are the huge, 100 metre drops – when the stuff that we design intersects and creates entirely new caves that you cannot recognise,” Møller says.

“It’s pretty amazing how many of these ‘woah’ moments we still experience two years into the project,” Friis adds. “Because of the procedural nature of the thing, you never know exactly what you’re going to get, and it’s always lovely to see when it happens.” 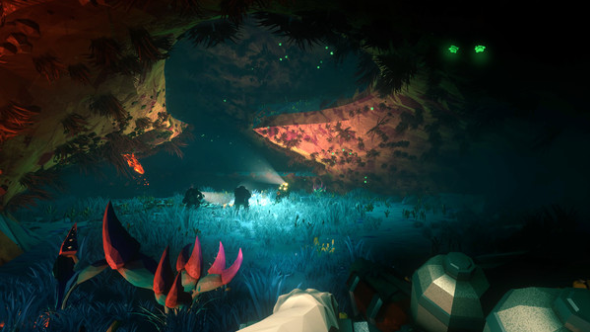 Two years on, with Deep Rock Galactic now in Early Access, Ghost Ship Games are handing over the tools to their miners.

“When we generate the levels we drill the tunnels – just not manually,” Møller says. “So when you are drilling in the terrain, it’s the same tech as when we are building the level, technically. It’s just more industrial-looking.”

The studio are essentially passing the pickaxe responsible for level building to you and your dwarven colleagues each time you load into a map.

“It’s the same operation,” Friis says. “Whether we’re using our tools or the players are blowing it up.”

In this sponsored series, we’re looking at how game developers are taking advantage of Unreal Engine 4 to create a new generation of PC games. With thanks to Epic Games and Ghost Ship Games.