The owners of mining company Deep Rock Galactic clearly don’t understand the long-term benefits of investing in people. I, along with my three dwarven colleagues, have just finished a job collecting Morkite in a dark mine that tunnels through the radioactive exclusion zone of the planet Hoxxes IV (our latest, quite literal, quarry).

Now we are battling for our lives against waves of spidery aliens as we try to make our way back to the extraction pod – a transport which will leave in three minutes whether we are in it or not. And you thought your office was unpleasant.

Insult is added to the very real danger of injury by our M.U.L.E. unit’s cold disregard for our predicament. The quadruped droid (whose name stands for Mining Utility Lift-Engine, by the way, and is not, disappointingly, a reference to Ozark Software’s seminal co-op resource gatherer of the same name) trots along behind us as we descend into the irradiated mine. It unfurls four metallic bins from its flanks whenever we ask, allowing us to deposit resources along the way.

Once the target threshold has been reached a big red button pops out. Hitting it informs the company that the team have completed their work order and triggers the needlessly unsupportive countdown that accompanies our escape. In some situations, you can follow the M.U.L.E.’s path back through the tunnels, using the sickly green beacons it leaves as guidance. But on this occasion the labour-saving device has clambered up the wall of a high-ceilinged chamber and out the top through a small tunnel. Great, guess we’ll have to find another way out of here then. 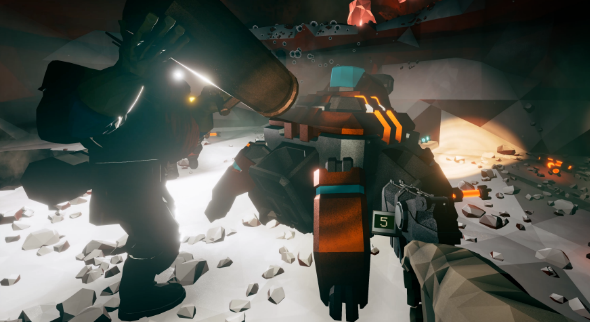 The floor of the cavern is carpeted in flares – we each have a stock of four to chuck at any one time, but they are an unlimited resource which regenerate on a slow trickle charge – and the aggressive exploding spiders are now joined by a hulking great monstrosity that belongs in Starship Troopers.

As an engineer, I carry a grenade launcher, which is handy for flinging explosives at the xenomorph’s abdominal weak point. I have also deployed my two sentry guns, which are helping thin the ranks – though I have to intermittently replenish their ammo and am running low myself as our last restock was a while back.

Capitalism and dwarves are all very well, but you might be interested to learn that Minecraft helped to save on of the world’s biggest primeval forests.

The gunner in our team is laying down suppressive fire with a giant (for a dwarf, anyway) minigun, taking occasional potshots with a revolver. He also has a zipline gun which should get us up to a ledge from which we can pick up the M.U.L.E.’s trail. I fling a couple of badly-aimed shots from my platform gun – which creates dwarf-supporting rocky outcrops – to create a staircase to safety from the top.

Two minutes left on the timer. 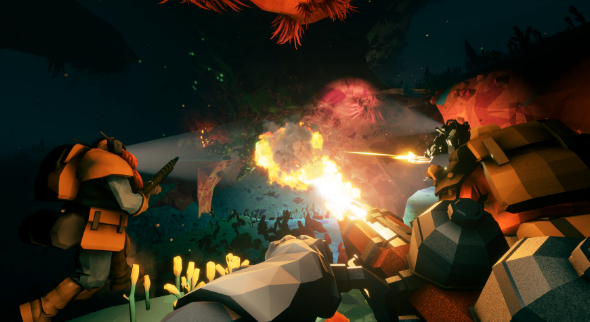 The team’s driller – a character who can tunnel through rock to reach buried resources, and make short work of the compacted dirt tunnels which link the procedurally-generated cave chambers – is buying us a little time with his flamethrower. And our scout, who has a handy grappling hook and flare gun, is somewhere behind us. We think.

At the top of the zipline we find the tunnel that we created to get down here in the first place, and begin clambering upwards, all the while firing back at the rush of beasties spilling out of the gloom.

One minute until launch (we don’t even have pensions, and we are starting to question our lack of employee benefits at this point). 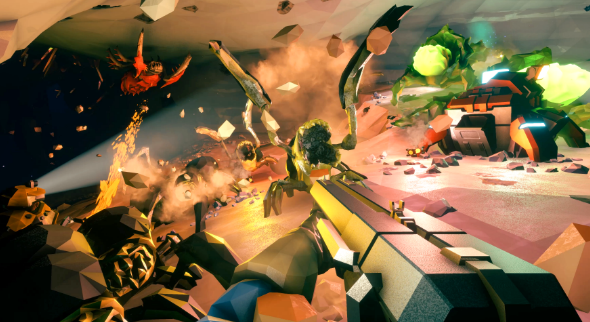 After getting briefly disoriented, we find the escape pod and rush for the ramp. The ferocity of the assault hasn’t lessened, and I am now out of ammo. The corpse of an alien blocks my path into the pod. I get overwhelmed (in the game, not emotionally) and collapse. Heroically, my teammates come to my aid, reviving me and providing cover while I run into the relative safety of the passenger cabin. We do a quick headcount: “One, two, three…” Somebody’s missing. Where is our scout?

30 seconds left on the clock.

Now, technically there is no real penalty if we leave them behind – we will still get paid, and will still be able to invest that money into new tools and even grander beards. For a second the three of us feel the company’s profit-driven ethos descend on us like a thick, comforting fog. Do we really want to head back out into the cold darkness? Oh, the gunner’s off – I suppose we do, then.

We selflessly charge back out into the fray just as the scout pops out of a nearby tunnel and sprints for the pod. Ten seconds now. I swing my pickaxe at any alien in range. Bullets fly over my shoulder and a grenade goes off somewhere. Five seconds. 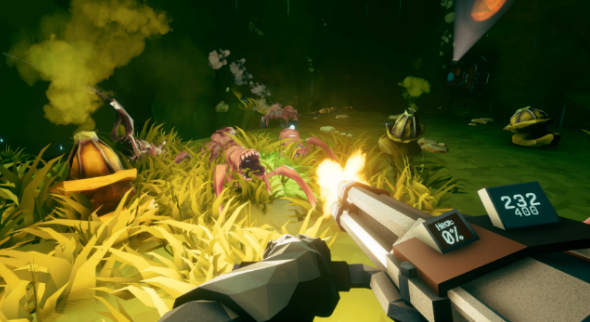 She’s in. Three seconds. We’re all in. One second. The door clangs shut and we cheer and laugh as the ascent begins. The scout thanks us for coming back for her. We stop laughing.

Deep Rock Galactic is a riot, it turns out. A heady cocktail of Left 4 Dead and Minecraft in which capitalism and facial hair reign supreme. How the game sustains that rush as its mix of exploration, intermittent horde attacks, and panicked escapes become more familiar will be key to its longevity after launch. We only sampled the simpler cave networks the engine is capable of generating, and two modes – one in which we hunted morphite, and one in which we tracked down alien eggs – both of which felt ostensibly the same. But these are early days for Ghost Ship Games’ mining enterprise, and there are more modes and enemy types to come.