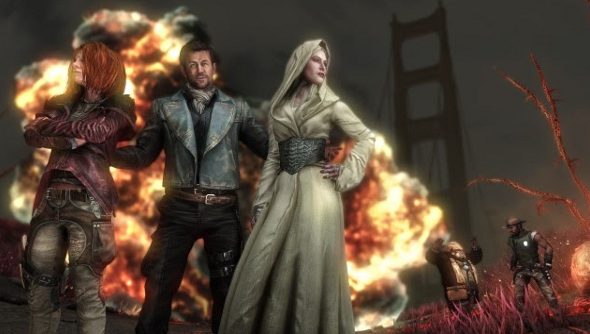 Trion Worlds’ sci-fi MMO third person shooter, Defiance, joins Rift as it switches to the free-to-play model, effective as of today. This is just in time for the second season of the TV show, also titled Defiance, set in the same universe as the MMO.

Free players will be able to experience the main storyline as well as new story missions.

The central conceit of the game – beyond being a rare third-person shooter MMO – was that it was connected to the TV show, and the two would inform each other. But given that Defiance the game is set in The San Francisco Bay area, and Defiance the show is set in the ruins of St. Louis, Missouri, the two weren’t quite as linked as one might have hoped.

A few characters appeared in both the show and the game, and some events had ripple effects, but it never quite felt like the two were particularly connected. Since the conclusion of the first season, the MMO has been bridging the gap between it and season two.

I’m tempted to take the game for a spin once again later this month – the show kicks off on June 19th on Syfy – to see if the links between both pieces of media are a bit stronger this time around.

If you fancy buying the game instead of getting it for free, you’ll get some bonuses:

Free players will be limited to two character slots, fewer load outs and less inventory space, while premium players will receive 1000 Arkforge, which can be used for weapon upgrades.