Philips and Alienware are going head-to-head with big format gaming displays that actually will see the light of day. Those BFGDs touted by Nvidia et al have still yet to be released, but a pair of 55-inch gaming monitors from Alienware and Philips will hit the streets in September and Q1 of 2020 respectively making us question why anyone would wait for a BFGD. And yeah, if you thought a 30-inch PC monitor was overkill you ain’t seen nothing yet…

The Alienware screen is an achingly beautiful OLED display, and must surely rank as the best-looking gaming monitor ever released, both in terms of its overall aesthetic and its visual fidelity. The Philips screen can’t boast the same incredible OLED imagery but the fact that it’s sporting a dedicated Bowers and Wilkins sound bar dangling below the panel should at least make it the best-sounding monitor around.

And it will be considerably cheaper than the glorious Alienware big boy; the 55-inch OLED will be £3,200 when it launches later this year, while Philips is reportedly touting a price tag around half that for its own large-scale beauty.

The Alienware AW5520QF uses the OLED panel to great effect, creating a 55-inch display that’s impossibly thin. The self-emissive nature of OLED means that it needs no backlighting to deliver an image, and that means the screen itself just needs to be as thick as a pane of glass.

All the electronics and inputs still need to be housed somewhere though, so the Legend design delivers the same sculpted aesthetic that Dell has adopted on all its latest Alienware products around the rear and base of the monitor. 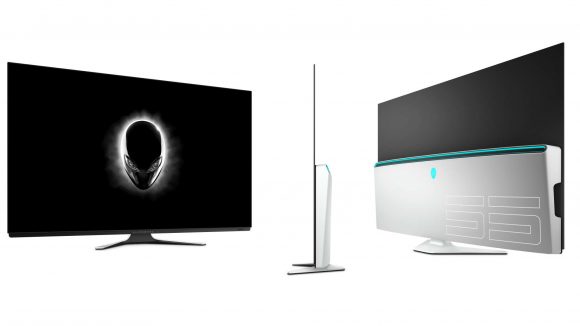 In terms of the overall specs list you’re looking at a 4K resolution with a pixel pitch of 0.3108mm and a speedy 120Hz refresh rate for added smoothness. It’s also sporting AMD FreeSync support, and I’d expect it will probably fulfil the needs for G-Sync compatibility too. What might surprise you is that its peak luminance is just 400cd/m2, which probably seems rather weak for a three grand display. But the incredible contrast performance of the OLED technology outweighs the need for retina-searing brightness levels for HDR.

When you can have absolute black pixels sitting cheek-by-jowl with white pixels, and without any backlight bleed, then it’s not just going to be Paul McCartney singing about perfect harmony.

The Philips 55 Momentum 558M1RY has a similar spec list to the Alienware, but the most obvious difference is the shift from OLED to a more standard LCD panel. Given Philips’ presence in the TV market I would expect it to be a 55-inch VA screen cribbed from its television department, which means it needs decent backlighting to create an image that’s anywhere near the performance of the Alienware, but also explains why it will be half the price. 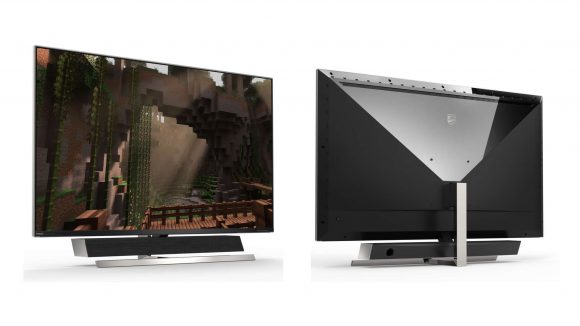 But it’s still going to deliver 4K visuals running at 120Hz, and will have its own HDR skillz, certified by the DisplayHDR1000 specification. That means it will be capable of hitting a peak luminance of 1,000cd/m2. It too is rocking AdaptiveSync technology, which means you’ll be getting FreeSync support, and potentially some G-Sync support too for game frame synchronisation funtimes.

What’s really setting the Philips 55 Momentum apart for me though is that Bowers and Wilkins soundbar hanging beneath the panel itself. B&W makes some of the best-sounding audio equipment around – I absolutely fell in love with its incredible Zeppelin speaker – so having the British sonic heroes taking care of the audio will make it a winner on the sound side even if it can’t quite hit the same visual heights as an expensive OLED.

Whatever Nvidia, Asus, HP, or Acer want to say about the AWOL big format gaming displays, these two 55-inch screens from Alienware and Philips render them all but irrelevant. I can’t see why anyone would even consider a $5,000 HP BFGD when you could pick up the Alienware OLED for a couple of grand less.