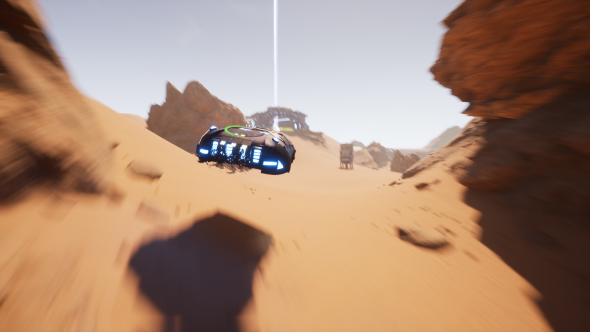 To despoil is to plunder or pillage, but in the arena racer Despoiler the word takes on a more literal meaning. The game strips videogame cars of their spoilers, hubcabs, tyres, wheels, almost everything – leaving behind a sleek chassis which bobs and weaves a metre or two above the ground, suspended by some future technology.

Except it is no sci-fi propulsion mechanism at all that powers Despoiler’s machines, but the trickery of Unreal Engine 4. 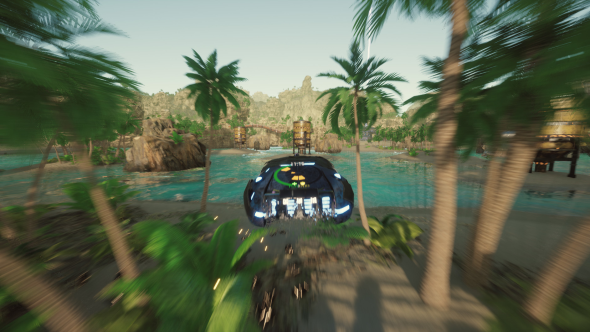 Despoiler is a competitive driving game that leans on the lessons of MOBAs. Two teams head out into the wildlands to complete opposing objectives while salvaging the scrap that constitutes an in-game economy. Scrap can either be kept as armour, or cashed in for powerful new abilities, leading to a confrontational endgame.

First-time developers Parallax Labs decided that hovercraft would provide the pacing they were after as well as the capacity for exciting technological upgrades. “It was a vehicle for some gameplay that we wanted to create, pun intended,” game director Elliot Gray tells us. “And of course, it looks cool.”

Hovercraft held another kind of allure: for a studio composed of just three people that is reliant on contractors for extra help, not having to create wheeled vehicles is a boon.

“We definitely liked the idea because they’re not super intricately detailed 3D characters that we have to do a whole lot of animation for,” Gray explains. “We were playing to our strengths and not taking on too much, keeping within scope.”

There are, however, specific demands involved in making sure hovercrafts convince as powerful machines, moving at high speed in defiance of gravity. On that front, it helps that Despoiler’s floating cars are fully simulated with physics.

“A big part of making them feel and look cool is actually just the physics programming that’s going into them,” Gray says. “It’s been a challenge in some areas, but it means that when you go over bumps they just react very realistically. There’s a lot of secondary movement, as an animator would call it, that’s innate in the physics system.” 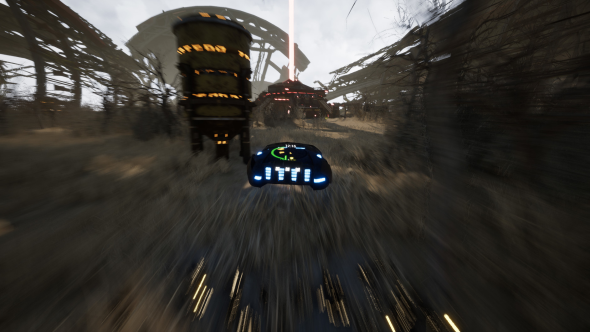 The team have been able to manually add forces to the craft so that they are visibly buffeted by the impact of incoming weapons. And surrounding the cars is a bubble of particle and visual effects: each hovercraft casts shadow and light, as well as throwing up dust, water spray, or debris from whatever terrain they happen to be passing over.

“That’s actually a great situation where it’s one of the simplest bits of code,” Gray explains. “On a technical level, it’s a very simple raycast to see where the ground is below the car, and adding the right kind of particle based on the terrain.”

The team are relying on Unreal Engine 4’s subtle particle lighting, as well as their own effects, which Gray has coded directly into the engine. “Even the particle effects that I’ve built in there aren’t all that complicated, but it looks beautiful,” he says.

All of these details help anchor these space-age vehicles in the game, ensuring they feel part of a world they never quite come into physical contact with.

The magic of photogrammetry 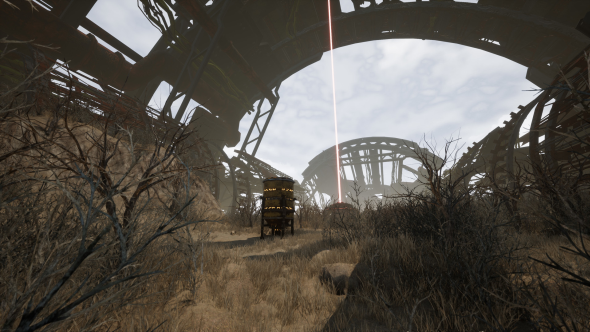 The arenas these vehicles battle in run the gamut from the sun and sea of the Pacific islands to shattered stadiums rooted in scrubland.

“Unreal enables us to do pretty much whatever we want,” Gray says. “If we can think of it, we’ll be able to put it in a level. Taking the typical process from grey box through to final art has been smooth sailing. We haven’t really run into roadblocks.”

Grey boxing is the process by which a level is first blocked out as simple geometric shapes, defining its form and function. After that, Parallax Labs have hired artists to transform those blocks into gorgeous environment assets. The artists have often employed photogrammetry, a technique which sees photos of real-world objects scanned into software to form the basis of game textures. 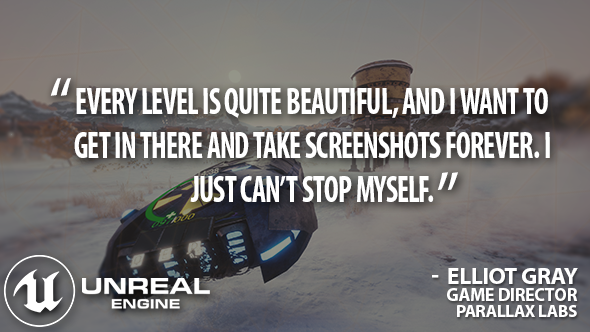 “Because all of our artists have been contractors, I was a bit concerned,” Gray admits. “But we found some really talented individuals and they have been able to smash out really nice results based on photogrammetry as well as their own unique work.”

Gray is especially fond of being knocked sideways, like a hovercraft taking damage, by the look of his own game.

“Every level is quite beautiful, and I want to get in there and take screenshots forever,” he gushes. “I just can’t stop myself.”

Despoiler is coming to Steam early this year. Unreal Engine 4 is now free.

In this sponsored series, we’re looking at how game developers are taking advantage of Unreal Engine 4 to create a new generation of PC games. With thanks to Epic Games and Parallax Labs.