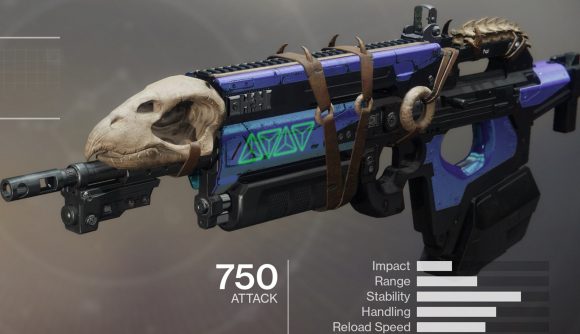 Datamines have dug up some major potential additions to Destiny 2 after its latest patch, but you don’t have to wait for all of those – Bad Juju is already here. Now that the new rendition of Moments of Triumph is live, you can claim the new Exotic pulse rifle for yourself with the completion of a handful of new steps.

Bad Juju once again offers up String of Curses, so kills refill your magazine, briefly increase your damage, and grant you super energy. The String of Curses stacks up to five times, and according to some preliminary player research on Reddit, it will fully double your damage at the top end.

Getting Bad Juju is pretty straightforward. You’ve got to place 18 Tribute statues in the Tribute Hall, as noted in the Raid Secrets subreddit. That’ll be 13 standard tributes – either earned or purchased – as well as five statues of Calus’ War Beast. Once the five dogs are in place, you’ll unlock a chest that will send you onto the mission for Bad Juju.

The mission is, by all accounts, pretty doable solo, so you shouldn’t have to get your fireteam together in order to claim the gun.

We expect Gjallarhorn (or maybe Dragon’s Breath) to be the next major throwback Destiny 2 exotic, as datamines have uncovered plans for a returning Solar rocket launcher.