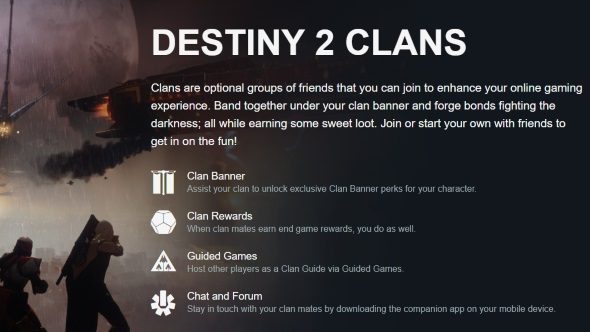 Spawn, shoot, loot, die, and live to loot again. Multiplayer FPS juggernaut Destiny 2 is tantalisingly close now, and Bungie have decided to sweeten the deal just a little further by inviting clans to pre-register for a more organised arrival on day one. You can search for clans to join, browse the pages of existing registrations, or create your own – all par for the course for Bungie’s polished and robust community pages.

Our Destiny 2 clans guide will tell you exactly how they work.

With Destiny 2 being a cooperative shooter, joining a clan brings its own range of benefits, including fancy Clan Banner-related perks, various shiny shared rewards as you and your buddies chew your way through the endgame content, and the option to keep track of what your crew are up both in-game and via the official mobile companion app, which doubles as a chat and forum client.

Arguably the biggest feature is the Guided Games system, where a clan player can host endgame content and invite less experienced solo players to tackle the most demanding missions, on the understanding that the Guide player is the one calling the shots, and that the Seeker (the solo player) is still learning the ropes. All a relief for clanless players, who were largely excluded from Raids and other such high-teamwork, high-reward scenarios in the original game.

While you are, of course, free to make your own clan or join your friends, we here at PCGamesN are ahead of the curve and provide you with an invitation to our super-secret Guardian clubhouse. We promise only the most extravagant of loot, the most exciting of gunfights, and the most orange of banners. Just look at it. It’s majestic.

Destiny 2 is due for release on October 24th, with console players sneaking in ahead a little earlier on September 6th.