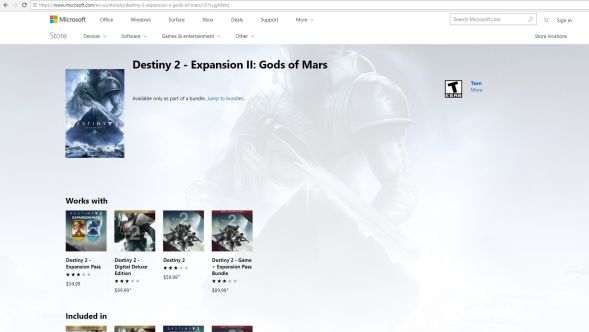 A listing for Destiny 2’s second expansion seems to have been posted on the Xbox store. Gods of Mars was previously listed on the PlayStation network last month, but a new listing recently went live, before being near-immediately taken down.

Here’s what’s going on in Destiny 2’s The Dawning.

Fortunately, redditor TheDarkS0ul captured screenshots of the listing, confirming the expansion’s name, Gods of Mars, and with an updated description.

That description, in its entirety, reads “Destiny 2 expansion II: Gods of Mars sends your Guardian out to investigate a mysterious signal originiating from Mars’ Northern Point, a brand new destination with all new story missions and adventures. Rasputin, the last of the ancient Warminds, has been alerted to a dark threat from beyond the Solar System. He has betrayed humanity and plans to construct a powerful weapon capable of detonating the Traverler itself. Work alongside Ana Bray who has emerged from the shadows after being missing for years, and destory Rasputin before his machinations are realized.”

The page says that Gods of Mars will only be available as part of one of Destiny 2’s bundles, and does not offer a release date for the expansion.

We’ve reached out to Activision asking them to confirm the information included in the leaks.

Original story, December 28, 2017:Whatappearsto bea premature store listing on the PlayStation Network reveals new details of the second DLC expansion for Destiny 2. If the supposed leak is to be believed, it will be called Gods of Mars, and see players heading to the Frigid Vale for a new series of missions on the red planet. Most notably, the expansion will feature a new enemy faction to do battle with.

The story sees Charlemagne reawakening on Mars and imprisoning Rasputin, leading the Guardians work with Ana Bray to “to combat Charlemagne’s Remnants, free Rasputin, and uncover the secrets of Clovis Bray.”

PSN’s description has been preserved for posterity on Reddit, but here are the highlights:

The expansion is scheduled for release in March 2018, and this listing reports a price $19.99 USD, the same as Curse of Osiris. And yet, it’s worth treating all of this with a healthy bit of scepticism; YouTuber UnknownPlayer has combed through the listing and built a pretty convincing case for why it might be fake, and the images photoshopped.