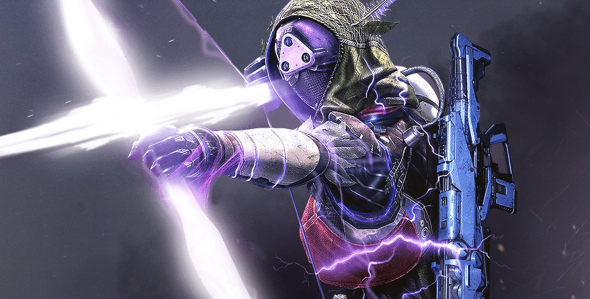 If there’s one thing Bungie know, it’s how to make videogame guns sing to the tune of bang bang, and Destiny 2’s shooting feels incredible. At the start of the game, you’re given a rusty rifle and a pistol that kicks like Anderson Silva, snapping your aim upwards as it angrily spits out fire, then you’re let loose to churn through alien enemies. Outside of staring at stunning skyboxes and occasionally zipping around in your Sparrow, or taking part in an impromptu dance-off, there’s not much else to it. Still, the foundations are ridiculously solid.

Check out our Destiny 2 class guide to get ready for the PC launch.

During that introductory section, you’d be forgiven for thinking Destiny 2’s shooting was average, particularly if you’re sticking to the auto rifle. While the pistol is used for quickly taking down enemy shields in an inaccurate hail, the rifle is best for chipping away at an enemy’s health. It offers barely any resistance via recoil, either – just hold the reticle on the head of a Cabal soldier and wait for it to pop.

As you power through the game, however, the weaponry gets steadily more impressive: kinetic rifles that knock enemies back with sheer force; hand cannons that make Resident Evil’s head-splatting magnum blush; angry, ammo-hungry rifles that increase their range and rate of fire as you hold down the trigger; and grenade launchers that sound as satisfying as they do in that scene in Terminator 2. 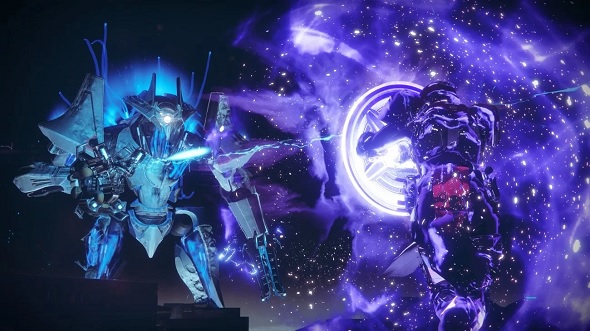 The thing is, the sound, look, behaviour, and feel of the guns is only one part of the reason why they’re so great to wield. You’re really having so much fun because of how enemies react to your volleys; flinching, losing body parts, and finally tumbling away as they succumb to the damage. When you take on a larger enemy like an Arsenal Walker – a spider-esque tank with a massive health bar – it feels satisfying because you can actively target its weak points and bring it down faster. It makes the act of shooting feel more tactical, while also giving you the sense that your aggression is having a big impact on the world.

But it’s not just that. A collection of things come together to make Destiny’s shooting sing. There’s a reason Call of Duty’s multiplayer was so addictive the first time you played it: it’s the numbers, Mason. Seeing that score float out of a dying enemy with the dull ‘thud’ of a kill shot just drills into your lizard brain. You’re a rat in a maze, ignoring your food and water, going straight for the cocaine. Here, though, the cocaine is higher damage numbers in increasingly bright fonts. 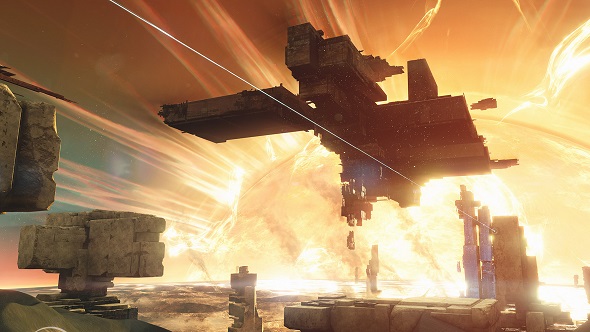 Destiny combines that numbery goodness with another popular and moreish portion of modern game design: loot boxes. However you feel about them, there’s no denying the thrill of opening a loot box in a game such as Overwatch. We all like a surprise, right?

In Destiny and its sequel, every single enemy is a loot box. When they die, they pop open like meat pinatas, spilling collectibles all over the floor. It’s telling that the shooting only starts to click after Destiny 2’s opening section, where Bungie’s murder-loot is notably absent. Most of the time, various types of ammunition spill out, but occasionally you get an Engram – a mystery piece of armour or a weapon, colour-coded for rarity. They tumble from enemies’ still-warm corpses before they even hit the floor, all brightly coloured and eye-catching; a shower of candy flying into the air and physically rolling across the ground, scattering about. There’s no denying it makes you want more.

You might not realise it is this reward that you are chasing, but do take a minute to think about it the next time you catch yourself chasing an Engram that is rolling down the hill in the middle of a firefight. Destiny 2’s shooting is solid, sure, but it is elevated by the game’s walking loot boxes and sexy damage numbers.