The Farm is Destiny 2’s main social space – the place you’ll go to check your mail, process your loot, and unwind with some football between raids. It went live in Destiny 2’s console beta for a quick stress test over the weekend – a stress test that was meant to last only an hour. However, once you’d spawned in, the game didn’t actually kick you out, and one dedicated Redditor has been “guarding” The Farm for 15 hours and counting.

What will you put in those vaults? Destiny 2’s exotic weapons, that’s what.

GhStRdR2k has been keeping watch over The Farm “just in case the Cabal decide to try anything crazy while everyone is away.” I was reminded of Tom Hanks in Castaway when they say “I decided to try a little game to keep my mind sharp and reflexes fast. I challenged myself to kick the soccer ball into every place I could… and I did.”

Here’s the gallery on Imgur, which also doubles as a handy tour of The Farm for those of you who don’t own a console. GhStRdR2k manages to get that ball into all sorts of interesting places.

In our own tour of the Farm, we spotted crates stamped with Dead Orbit livery around a landing pad near a very picturesque lake, seemingly confirming the space goths – a faction from the original game – will have a presence in the sequel. Of their rivals, New Monarchy and the Future War Cult, there was no sign. 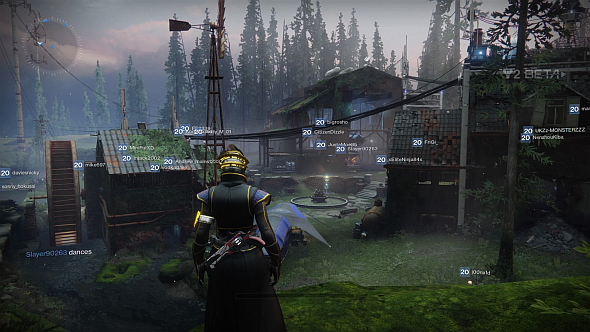 There were no NPCs at all in the test, which meant we’ve been able to glean almost nothing of the story. But we spotted spaces for the usual facilities: the Cryptarch, Postmaster, Crucible, Shipwright, Vaults, and so on.