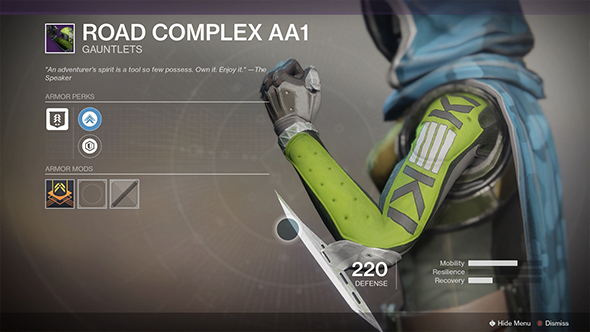 Update September 15, 2017: Bungie have elaborated on the process by which the gloves’ controversial design made it into the game in the first place.

This gauntlet isn’t the only thing in Destiny 2 that may cause controversy – just look at the microtransactions debate.

DeeJ explains that the design was first created in June 2015, drawing together inspiration from “some graphic design that belongs to sports teams” along with “some primitive shapes and chevrons that were used to permeate our Guardian class iconography.”

It sounds like the likeness is a coincidence – DeeJ says the design didn’t set out to emulate the meme in question. Still, the similarity is undeniable – how did the finished design make it into the game?

As some commenters pointed out when this story first broke, the ‘kek’ meme didn’t originate as a hate symbol, but in World of Warcraft as a silly translation for ‘lol’ in Orcish (according to knowyourmeme.com). It then evolved, as memes do, into a satirical religion, and then a fictional country. Its adoption by the American far-right is a very recent twist.

DeeJ says Bungie have a team who check for this stuff, but that they flagged the gloves’ design in one of its earlier, basically harmless contexts, and approved them. He says Bungie are reviewing their creative and review processes to ensure this doesn’t recur, and says:

“We want everyone to know their identity is welcome in our studio and in the worlds we create. This isn’t merely a platitude, but an official pillar we hold ourselves, and our work, to.”

You can read his statement in full at Bungie.net.

Original story September 12, 2017:Bungie have just revealed that they are removing a gauntlet from Destiny 2 that “shares elements with a hate symbol.” They say the similarities are not intentional, and they are working on the removal as quickly as they’re able.

The gauntlet in question is the Road Complex AA1, which features lettering and a green colour reminiscent of the ‘Kekistan’ flag, a symbol of some alt-right groups.

Exactly what measures Bungie will take to remove the item or how that will affect players using it are unclear, but it seems that it would be a simple matter to cover the item with a new texture.

2/2 Our deepest apologies. This does NOT represent our values, and we are working quickly to correct this. We renounce hate in all forms.

The symbol itself has a long and complex history in forum culture which is far too complicated to address here, but it came to prominence in recent times as a symbol for portions of the alt-right. The ‘Kekistan’ flag is often flown in support of those groups, and in marches promoting racism and white nationalism.

Bungie CEO Pete Parsons affirms the decision on his own Twitter, emphasizing the company’s respect for players and coworkers of all backgrounds.

At Bungie, our company values place the highest emphasis on inclusion of all people and respect for all who work with us or play our games. https://t.co/lox0XuYhgJ