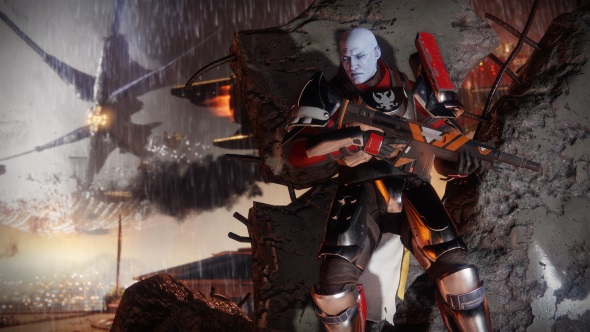 It’s been a pretty packed day of Destiny 2 at the game’s Los Angeles premiere, but that means we’ve been able to plunge into the depths of a shooter that’s pretty alien to us here on PC. Watching it from afar has been strange these past three years, but playing it on PC in 4K has easily demonstrated that the hype isn’t all just hyperbole from a community that doesn’t have the MMO roots to judge against. Destiny 2 is a seriously interesting social game, and one that I think is going to be this year and beyond’s next big obsession.

Need convincing of its PC credentials? We chatted to the team behind Destiny 2’s PC version.

Let’s take a quick look at what Bungie have introduced us to so far:

Not all that was playable on the show floor, but I did get to spent quality time with the game’s first campaign mission, a Strike, and several rounds of Countdown. The important thing to note about all of them is how cohesive the entire package feels; unlike shooters such as Battlefield, where the campaign feels entirely divorced from its multiplayer, Destiny 2 is clearly designed as a complete experience where the stitches between components are meant to be invisible. You play as the same character in all areas, and so your familiarity with their skillset and gear is fundamental to every area of the game. That’s not to say the modes feel samey – a Strike is clearly not a campaign mission, and neither are anything like the absurdly pacey PvP – but they all feed harmoniously into a whole.

I can’t stress enough how good the shooting is, and that’s fundamental to everything that Destiny 2 is. For all the talk of raids, clans, and social services, this is an MMO only in ideas and basic structure. Moment to moment Destiny is a shooter, and a damn fine one. It’s got a broad armoury that contains old-faithful style assault rifles (sorry, I mean auto rifles), DMR-like scouts, and more exotic creations like the lightning-discharging fusion rifle.

There’s dozens and dozens of them, too, but they all feel uniquely designed and memorable. The Sunshot, for example, is a hand cannon that fires like a pistol-sized shotgun, and is reloaded with a strange kind of ball rather than a set of shells. The kick is satisfying and the damage palpable, and the design of the weapon itself is good enough to be framed and mounted on a wall. It, along with so many other guns present in the demo, felt so satisfying to shoot that I immediately began thinking of games like Doom. Not because they were similar, but because they both possess so much personality in their arsenal. When guns feel almost like characters in their own right, you known the shooting has been perfectly refined.

Level design to make you smile

The opening of Destiny 2’s campaign, set in the flaming ruins of humanity’s last city, is good, but it’s not going to blow you away. If you’ve played a lot of the original game and know how bland some of it’s core solo quests can be, then this successor ticks a lot of required improvement boxes, but its fun drop-podding enemies aren’t quite enough to make you think long into the night about them. No such thing can be said about The Inverted Spire, however. This Strike mission set on new planet Nessus, a world inhabited by living machines the Vex, is bursting with creativity.

Firstly, there’s a bunch of first-person platforming that isn’t tedious or frustrating. Players in Destiny have access to a variety of different jump abilities, and Bungie are certainly making the most of that. But beyond these leaping puzzles lies quite the centre piece: a chasm being actively drilled by a series of swinging mechanical arms. Your three-man team must navigate this excavation area, simultaneously dodging out the way of digging equipment and fighting off Vex and Cabal enemies. It’s not exactly difficult, but there’s something to be admired in the way it demands constant swapping between combat and platforming.

And just as you think the Strike’s main event is over, in marches the Modular Mind. A towering three-stage boss, you battle him through a series of beautiful little arenas that collapse beneath you as you chip away his health bar. It’s a truly memorable encounter, akin to the sort of thing you’d only see in an MMO like World of Warcraft. Only this time it was about doing cool double jumps while hurling flaming swords at angry robots, rather than managing cooldowns. (Okay, there are cooldowns, but you get to shoot absurdly good guns while-u-wait).

Skills that really are super

Destiny 2’s Titan can create a disc-like shield and hurl it frisbee-style at enemies. Yes, he’s Captain America, but in space. Unfortunately this ability wasn’t on show at the event, but the alternate Striker super ability was. Supers require a bar to be filled, which takes around five minutes, but can be sped up by racking kills. There’s a good reason why they’re a once-in-a-while ability, though, and that’s because they’re quite the party trick. They really do put the super into superpowered.

Supers depend on your subclass. We know some subclasses will be returning, like the aforementioned Striker for the Titan. As a Striker you become a kind of lightning-charged Incredible Hulk, charging from foe to foe for intense melee damage. Also returning is the Gunslinger for the Hunter class, which provides the Golden Gun: a temporary flaming hand cannon that disintegrates foes. You may think that a charging Cabal Gladiator (a new enemy type for the sequel, complete with dual-wielded swords) is dangerous, but whip out the Golden Gun and life’s a cake walk. Or you could just dodge; double tap V and a Hunter can now leap out of the way. Every class has a new cooldown-based ability designed to aid in battle; Titans can create cover, while Warlocks can produce buffs. That makes them feel a touch more traditional MMO, but the implementation means the shooter pacing is still front and centre. This is the big one, isn’t it? Destiny’s always had something about it that would suggest that it could do well on PC, but the proof only comes with playing. The rigs the demo is being played on at the event are certainly beefy – i7 CPUs backed up by 1080Ti graphics cards – but importantly the experience is a true 60 fps at 4K. It looks wonderful at that resolution, but it’s the feel that such a frame rate provides that really adds to Destiny’s character. Swapping between that and the PS4 build, it is immediately obvious that the PC is just a snappier, purer version of the game.

That performance made the PvP mode just that little more enjoyable. While I can safely say I suck at Countdown (it didn’t help that the enemy team were made up of pro streamers), the mode just feels more at home on PC. I’m sure much of that is down to the fact that Countdown is basically Counter-Strike with super abilities, but the elimination-style progression of the match means that the quicker reaction times allowed by snappier gameplay produce notably better results for players.

I’m not sure the Crucible has quite the appeal of PC mainstays like CS:GO and Overwatch, but it’s too early to judge that. I think a lot of the PvP’s appeal will be tied to the progression of your Guardian, and so playing with pre-made characters I have no attachment to does little to help convince me. With familiarity of a skill set and confidence in my abilities, though, this could be a different story.

I’ve played quite a bit of the original Destiny on console, and for a little while Destiny 2 felt like more of the same, just exceptionally refined and adjusted. But after some time with the PC version, I quickly realised that there’s nothing quite like it on our platform. There will be the inevitable comparisons to Warframe, but it’s all surface. They share basic format ideas, but beyond that they’re worlds apart. For anyone who’s never played Destiny before, this sequel should already be generating intrigue. And that’s intrigue that, I hope, will lead thousands of PC players to discover what a brilliant, unique game Destiny 2 really is.