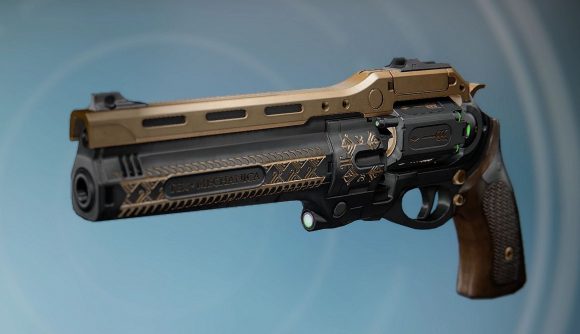 Destiny 2’s Season of the Forge is currently underway, with the quest to unlock the final forge of the Black Armory DLC having gone live yesterday. The next major content drop will be The Draw, an exotic quest which will bring the much-loved Last Word hand cannon back from vanilla Destiny. Thanks to a dataminer on Reddit, we may now have a better idea about what it’ll look like in Destiny 2, and what the quest to acquire it will entail.

Prolific dataminer Ginsor has dug up The Last Word’s perks and the high-level descriptions of each step in its quest, and condensed them into two handy infographics. Its most important perk, Fan Fire, returns, enabling you to fan the hammer and thus fire The Last Word more quickly than any other hand cannon. The second component of that perk contains some changes from its original form, however: rather than simply grant increased damage and aim assist when hip-firing, you get faster reload and accuracy on /successive/ hip-fire damage. So no more two-taps to the head for a near-instant time-to-kill.

As for how to get hold of The Last Word, we don’t know exactly what you’ll need to do, since the second infographic is missing the details. But it does show the quest steps with their high-level descriptions – one sends you back to the Hive ritual on Titan, while another involves killing Guardians in the Crucible, with deaths detracting from your progress. Your ultimate goal seems to be stopping an ominous Hive weapon master under directions from the Drifter. Thanks to Destiny community manager Cosmo, we do know that The Draw won’t be split into multiple time-gated sections, unlike the Thunderlord quest.

Those of you who played Destiny on consoles will remember The Last Word as something of a fan favourite. Its unusually rapid fire rate and bonus hip-fire damage made it a lethal proposition in close quarters – Rich tells me – verbatim – that “The Last Word paired with a sniper was the most exciting loadout to take into PvP, unless you were the kind of deviant who only enjoyed running around with a shotgun.”

The loss of bonus hip-fire damage might make it a little less potent in Destiny 2, but we’ll have to wait and see to be sure. Note also that everything datamined is subject to change until The Draw goes live – which it’s scheduled to do on January 29.