The PlayStation Network trophy list for Destiny 2 has leaked online. It’s mostly pretty standard stuff – if surprisingly short – but two are notable, one of which appears to give away the name of the raid.

Discover everything we know about giant space fish in our Destiny 2 raid guide.

According to trophy finders Exophase, the ‘Belly of the Beast’ trophy is awarded for completing the ‘Leviathan’ raid. That’s what we know for sure.

There’s an entity called the Leviathan in the Grimoire cards that tell the backstory of Oryx, the titular Taken King from the original game’s expansion. It’s strongly hinted to be an ally of the Traveler/the Light, and what with Light being a central theme of Destiny 2, it’s not impossible to see how that Leviathan might somehow be relevant, but it’s a big out-of-nowhere surprise if it is. Alternatively, it could just be a coincidence and the reason for the raid’s name is totally unrelated. 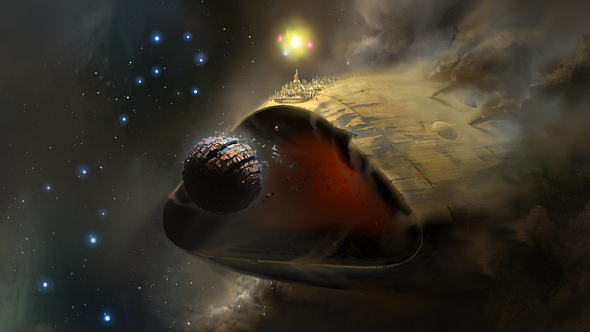 The most plausible suggestion so far for the raid’s setting is the Cabal Firebase in the European Dead Zone, but that does seem a bit prosaic in light of the new name and its possible connection to the concept art above. This Imgur albumlays out why the raid may in fact be set among the debris of a planetoid being sucked into the maw of a gigantic space fish. Nowthat’smore like it.

Less significantly, the ‘Lest Ye Be Judged’ trophy is awarded for encountering an Emissary from beyond. In the top left of the trophy icon are the letters ‘IX’ – the Roman numerals for nine. The Nine are mysterious beings known to hail from Jupiter, who occasionally intervene in the affairs of the rest of the Solar System in service of some unknown agenda.

In the original Destiny, this chiefly happened through the character of Xûr – an agent of the Nine who would show up in social spaces every weekend to sell players some of the game’s most powerful exotic equipment. He became a fixture of community Reddit threads and YouTube video reviews, so we don’t doubt that he or someone like him will return for the sequel.

But we also know that Titan, one of Jupiter’s moons, will be a major location in the game, so players will be closer to the Nine’s neighbourhood than ever. Could this trophy refer to a meeting with another of their emissaries, perhaps with a bigger role in the plot? It’s certainly possible – according to JrmtheJrm on Reddit, international translations of the trophy list show the female version of the word for ’emissary’, which suggests a new character, as Xûr is commonly supposed to be male. Though it’s hard to tell when it comes to an alien with tentacles for a face, of course.