After nearly two extra months spent gestating and developing under Bungie’s watchful eye, Destiny 2 is finally out on PC. But following all the PR and marketing about Bungie wanting to nail the PC version of Destiny 2, was it worth the wait? As ever, that is the question we hope to answer in our Destiny 2 performance review.

If you are new to our PC performance reviews then here is a quick summary of how they work. First off, our performance reviews are written to offer you the broadest picture possible, so we focus on hardware similar to what the majority of players have installed in their rigs. We test the game on a wide range of graphical settings using an i5 powered rig with 8GB of RAM, and try to hit 60fps with four of the most popular graphics cards. Even if your PC is not identical to our test setups, you should still be able to estimate the performance levels you can expect from your own machine. So without further flim-flamming, here is our Destiny 2 PC performance review. 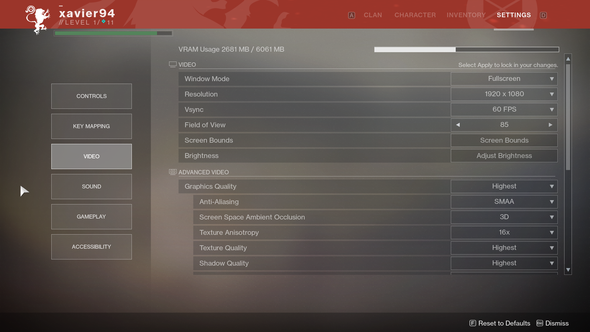 PC gamers will not be disappointed by the banquet of advanced graphical options waiting to be tweaked and adjusted when they dive into the menus, not to mention the standard array of graphical presets for those who do not fancy spending their first hour with the game cycling through menu screens. In addition, there are heaps of adjustable accessibility and gameplay options that we will outline as well.

The Destiny 2 PC options break down into the following screens: controls, key mapping, video, sound, gameplay, and accessibility. Controls will let you adjust your various controller inputs and sensitivity settings while key mapping will let you sort out your key bindings, which is useful if you are one of those mad people who does not use WASD.

The advanced section of the video settings tab is where you will spend your time though, digging through rendering and graphics options ranging from standard fixtures like anti-aliasing and ambient occlusion, to more exotic fare like foliage shadow distance, wind impulse, and the fidelity of light shafts. In total, there are 13 graphical and rendering settings in the advanced section. On top of that, you can also adjust your FOV, and VSync in the basic video section, and tweak resolution scale, HDR, chromatic aberration, and film grain in the additional video options right at the very bottom of the video tab. 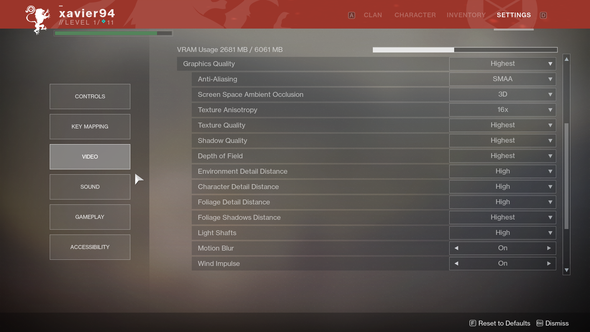 Most options can only be set to low, medium, or high, although a select few options can in addition be tuned to lowest or highest. There are four overall presets in the regular flavours of low, medium, high, and highest, but of course there is the option to create your own custom setup, too.

Finally, the gameplay and accessibility menus allow for all those personal tweaks like colourblind settings and HUD opacity – head to the gameplay tab if you are looking to turn off text chat or filter out profanities.

For our presets analysis we compare Destiny 2 on four different settings – highest, high, medium, and low – and see how the different presets affect graphical and performance quality.

As the PC version of Destiny 2 blocks virtually every third-party application used to benchmark games we have had to use a combination of the in-game fps counter, OBS, and a substantial amount of close observation to come up with the average frames per second counts used in the preset assessments below. 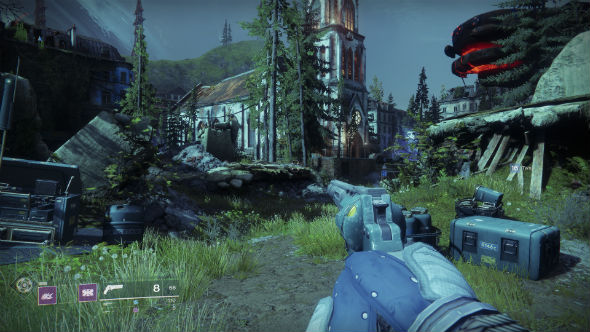 Performance and visual fidelity on the highest of Destiny 2’s four graphics presets is impossible to fault. It is an achingly pretty first-person shooter that manages to keep its head above the 60fps watermark with ease. Textures are detailed and sharp at all but the most extreme distance: the player’s wrists and the mountains in the distance are the only elements that could be called flat. Running, gunning, and jumping around the European Dead Zone is a visual delight on the highest.

Lighting really stands out when Destiny 2 is running on max settings, which is evidenced by the incredibly detailed shadows running across the grassy sections, rubble, and equipment in the screenshot above. That lighting gets even tastier when clouds open up and shafts of light beam through to dazzling effect. Foliage is another highlight of Destiny 2 max settings visual arsenal – you can make out details in branches and leaves even when you look at distant foliage. All of this with an average of 78 frames per second on an Nvidia GTX 1060? Blimey, Charlie, some work has been put into the PC version. 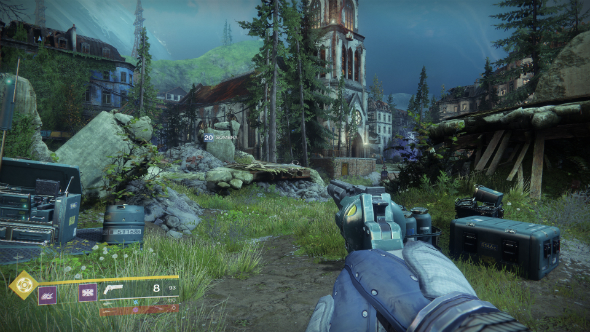 Dropping down to the high preset will net you plenty of performance benefits without doing much discernable damage to Destiny 2’s visuals. Not that you will need the extra frames, but expect a whopping average of 86fps. The price you have to pay for that performance return? It really is hard to pinpoint. Certainly, anti-aliasing takes a knock as jagged edges – albeit only very slightly jagged edges – start cropping up at all distances. In the above screenshot, you can spy them on the pistol, on the crates to the left of the shot, and on the roof of the church.

Up close, textures are that bit less detailed, with everything from the weathering details on the pistol to the dirt path in front of you lacking the crispness that they possess on max settings. That is as bad as it gets, though, and so Destiny 2 still proves to be a very handsome game on high settings. 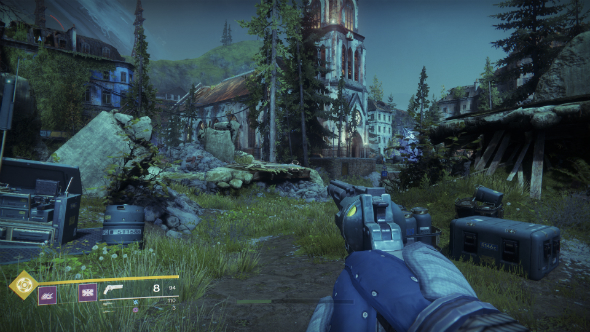 As you would expect, taking Destiny 2 down to medium settings makes room for an even higher average frames per second count by throwing some graphical luxuries out their respective arses. Buildings and foliage in the middle ground lose a lot of detail, there is less visible grime and dirt on the pistol, but it is distant features like the mountain and buildings in the middle of the above screenshot that suffer the most. On the plus side, the anti-aliasing issues introduced with high settings are not exacerbated by the switch to medium.

As on higher settings, we did not run into any performance hiccups playing Destiny 2 on medium settings with an Nvidia GTX 1060 installed in our rig – if you only care about upping your fps count then you can expect a boost to an average of 109 frames per second, too. It is also worth noting that turning the preset down to medium also diminishes details such as light shafts – they are still there, but they do not drop jaws like they used to. 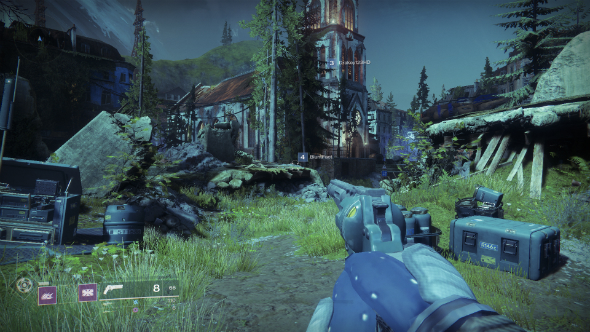 With only a very minor frame rate boost, there really is no good reason to knock Destiny 2 down to its lowest preset if your setup is comparable to ours. Just about everything that makes the game shine on high settings takes a heavy sit on the lowest preset: reflections, foliage detail, long-distance rendering, shadow quality, and anti-aliasing all suffer. Your pistol and gauntlets look particularly bad as they sport textures that look rather flat.

Performance on the low preset will help you eke out a few extra frames per second, but it is not worth the dip in fidelity unless you are still struggling to squeeze stable performance out of your rig.

To see how Destiny 2 performs on various hardware setups, we test the game on four graphics cards: two from Nvidia and two from AMD. We have sampled popular cards from the current and last generation of GPUs in order to offer the most useful information.

All four cards are tested at ultra settings, with every texture option set as high as they will go and every graphical effect turned on. For the test we play a 60-second sample that involves running, jumping, shooting, and melee combat. The same section is repeated three times in order to find an average.

Considering how modest our lineup of graphics cards is, those numbers are pretty impressive, particularly the minimum fps counts – not a single card dropped below 30fps on max settings. Whether your rig utilises a GTX 1060 or an R9 380, you should have no difficulties getting the PC version of Destiny 2 to outperform its console counterparts. If you are willing to drop down to high settings then you can even hit a constant 60fps on both the R9 380 and the RX 470 – the visual loss is nigh on impossible to spot when the game hits its action-packed stride.

In this section we comb through every graphics option on each of our four test GPUs in order to find out how to run Destiny 2 at an average of 60fps. 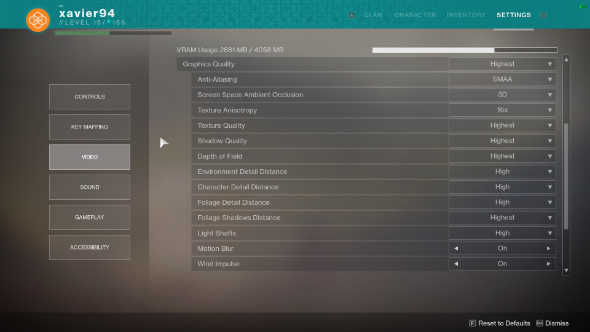 No need to agonise over the tiniest settings as the GTX 970 will happily run Destiny 2 in excess of 60 frames per second on max settings. Of course, if 62fps does not quite cut it for you then turning texture anisotropy down to 8x provides an ample boost to the average frame rate.

No worries if you are planning to run Destiny 2 on a GTX 1060 – you can turn every setting up to max and still get a velvet-smooth 78 frames per second, with a comfortable minimum of 60fps in particularly hectic shootouts. 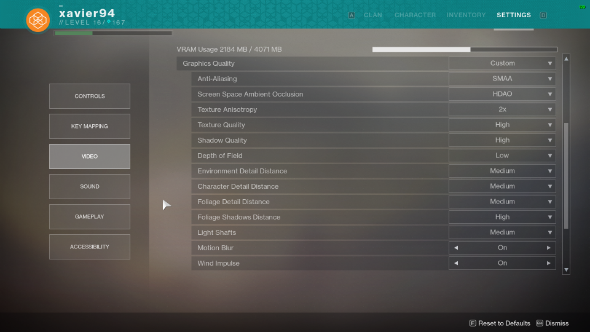 Getting Destiny 2 to run at 60fps on an R9 380 is refreshingly easy, suggesting Bungie have put a good deal of effort into optimisation for low-end cards. Of course, you will have to turn down most of your settings to meet that goal. Start by setting the overall graphics quality down to medium, then turn depth of field down to low – you can then adjust texture, shadow, and foliage shadows distance to high, and anti-aliasing up to SMAA. With those tweaks you can easily get a steady average of 60 frames per second, but you can squeeze a bit more graphical clout out of this card if you do not mind the frame rate occasionally dipping to 30fps. 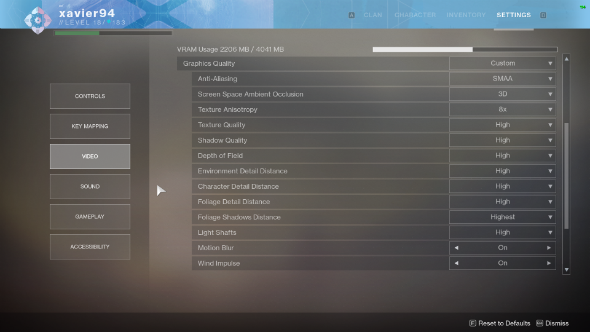 An RX 470 can run Destiny 2 at 60 frames per second on a mixture of high and highest settings. Start with the highest presets before switching texture and shadow quality down to high, texture anisotropy to 8x, and depth of field to high.

While a benchmarking tool would not go amiss, the quality of this PC build is apparent without having to pore over its frame per second counts. Triple-A first-person shooters of this calibre – with heaps of action on-screen at any given moment and sprawling levels to battle through – do not usually churn out well over 60fps on max settings. Yep, Destiny 2 on PC is not just more handsome than its console sibling, it outperforms it by a huge margin, too.

Testing on AMD and last-gen cards only confirms what our initial Destiny 2 PC performance testing suggested: Bungie have done their homework and delivered a sturdy PC version that even scales nicely with older GPUs.

A glut of graphics, accessibility, gameplay, and key mapping options allow PC players to tweak nearly every aspect of Destiny 2, while an in-game frame counter and a VRAM usage bar make tuning the performance to your setup painless. That extra time spent refining the PC build of Destiny 2 were certainly worthwhile: this might be the best PC version of 2017.