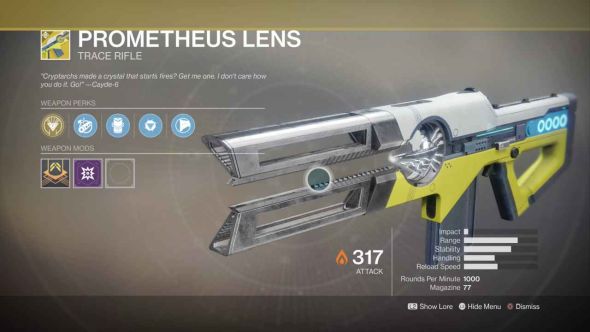 Update, December 12: Bungie’s solution to the hilariously overpowered Prometheus Lens is to make it “way too weak” until they can roll out a playtested solution.

That’s according to a tweet from yesterday evening. The nerf will be applied later today with the weekly reset, which will also bring a ton of other changes in the 1.1.1.1 patch.

Here’s everything we know about Destiny 2’s Curse of Osiris raid.

“Sure it’s fun,” say Bungie, of the fiery new laser rifle, “but it breaks the Crucible for anyone who wants to use a different weapon.” That’s undeniably true. Bungie haven’t had time to prepare a proper, playtested fix, so their temporary solution is to nerf it so hard that it falls out of the meta entirely:

Given the short window we had to make an emergency fix, it will be adjusted to be way too weak. In January, this new Exotic will receive a proper, play-tested design pass. (2/2)

It’s a necessarily inelegant fix to a clear problem. Still, because Xur sold Prometheus Lens this past weekend, the weapon was almost everywhere in the Crucible, resulting in a couple of days of silly fun that many in the community enjoyedand which was at least somewhat balanced – when everyone is OP, no-one is.

Destiny 2 servers will go down for quite a while today as the 1.1.1.1 patch is applied. That patch will make moreshort-term changes that Bungie promised the other weekto answer long-standing community criticisms of Destiny 2, including the addition of Masterwork weapons.

Original story, December 8: Last week’s Curse of Osiris DLC for Destiny 2 saw the arrival of, among other things, several new weapons. Which is good news for Destiny 2 players. The bad news, however, is that one of those new guns is pretty damn broken.

The Prometheus Lens is an exotic solar Trace rifle that shipped with the new expansion, and if you don’t have one, then PvP is proving to be a pretty bad time. You can see an example of one of those bad times in this clip from this Twitch stream. Several examples of entire teams being wiped out in moments can be found all over the Destiny subreddit, which is understandably pretty upset over the weapon.

In an announcement post over on the subreddit, the game’s senior gameplay designer Jon Weisnewski says Bungie are aware of the issue, and that it’s due to a bug rather than a massive balance misstep. Weisnewski goes on to say, however, that that bug won’t be fixed until the 1.1.1 patch, scheduled for December 12.

That means this weekend’s PvP is set to be pretty…interesting, but Bungie have confirmed they won’t be cancelling Trials of the Nine. That’s a strange move, but even stranger is Bungie’s response. Instead of actually doing something about it, Weisnewski simply asked that players “go easy on the players who have yet to get their hands on one,” confessing “we know you won’t, but it’s been said.”

If you’ve got yourself a Prometheus Lens already, have fun this weekend. If you don’t, it seems you could be set to have a Pretty Bad Time.