Destiny’s raids have been recognised as the highlight of the series ever since the original’s Vault of Glass, since when they’ve only got more ambitious in terms of intricacy, and the secrets they conceal. But the sequel’s Leviathan sets new standards in these fields. Here are some cool things we found on our first run.

For the best tips and strategies to beat the raid itself, check out our Destiny 2 Leviathan raid guide.

The biggest secret is the existence of a network of tunnels, which weave and wrap around all of the raid’s arenas. You’ve noticed all those locked doors? Guess where they lead. Some can be opened from within the arenas, via inconspicuous switches, but all can be opened from the tunnels, which means you can access parts of the raid before they’re active.We got to Calus’s throne room while still on the Pleasure Gardens, for instance.

What’s most interesting about this is how it ties into the new checkpoint system. As anyone who left the raid for a loot-processing trip to the Tower – like us – will know, you no longer spawn back in where you left off. Your progress is still saved, in that your current objective remains current, but you respawn back at Embarkment.

The normal route from here would be to take the people-cannons back up to the Castellum, where you’ll have to complete the banner-placing trial to unlock the current arena again. It’s not too hard once you get the hang of it, but it’s definitely a pain compared to the original.

The tunnels offer an alternative. If you can navigate them, you can use them to bypass the Castellum and just walk right to the current arena. We did this to get back to the Pleasure Gardens after a trip to the Tower, and were able to pick up where we left off. We also noticed that the corridors were marked with hound sigils, so we’re pretty sure there’s a signposting system in place, which should make future trips easier. Hopefully, with a little practice, the tunnels will be an easy shortcut. 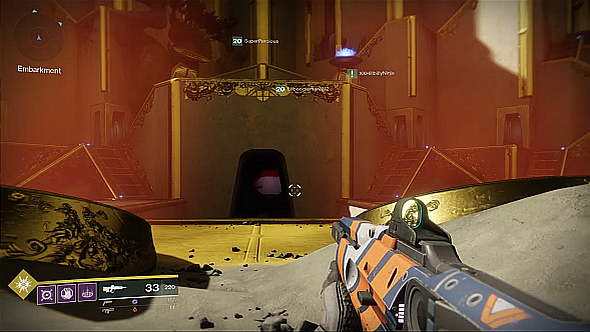 So how to access them from Embarkment? Easy. Head to the people-cannons but ignore them, and climb the ramps on either side up to the floor above. You’ll notice some large pipes in a toxic black sludge. Stand between the barrels of the people-cannons and look toward the ziggurat – head into that big black space to access the tunnels.

These tunnels are also where you’ll find the raid’s hidden chests, which you can unlock with the aqueduct, irrigation, and ventilator keys. Areas in the tunnels are named, and the sigils can also help you keep track.