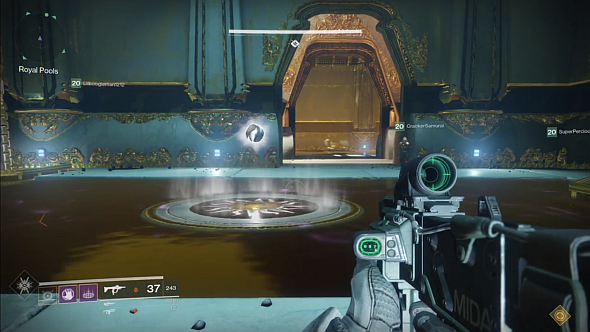 Destiny 2’s Leviathan raid will unlock for PC players later today. Over on console, the Royal Pools Challenge was added to the raid yesterday. We have to wait a week for Prestige difficulty, but we might get Challenges right away – we’ll find out tonight.

Conquer the rest of the Leviathan with our Destiny 2 raid guide.

Challenges are new wrinkles added to raid encounters after the original game’s Taken King expansion, granting emblems and other special rewards. A challenge for the Royal Pools, one of the Leviathan’s four main encounters, went live in the console version of the game yesterday. Here’s how to complete it.

The challenge for the Royal Pools is simply to have one player in the water of the central pool at all times – they’re not even allowed to jump. The simplest thing is probably to pick one player to stay in the water throughout the encounter, refreshing their psionic protection as necessary from the middle plate.

This means there’s one fewer player in the rotation around the outer plates, which makes things trickier. You’ll have one runner rather than two, so rather than split the four plates into pairs, we suggest just moving to the next plate clockwise after you’re replaced, and doing a circuit around the whole arena.

This means everyone should be prepared to handle a Bather or two solo. It’s also likely that someone’s psionic protection will expire before they can be replaced, so the chains will reset a little, and it might take you a little longer to trigger a damage phase. But as long as you’re quick and don’t die, this delay shouldn’t be fatal.

Pull it off, and as well as the usual chest for beating the encounter, you’ll get a second Challenge Mode chest with an extra heap of tokens, a special emblem, and a guaranteed gear drop (prestige or normal boots depending on the difficulty, or the SMG, pulse rifle, or auto rifle).