In Destiny lore, Saint-14 was a Titan, beloved of the people of the Last City, and owner of one of the coolest Exotic helmets in the original game. That helmet has just been added to the sequel, but it’s pretty clear we haven’t seen the last of Saint-14.

The raid lair seems to be Curse of Osiris’s most successful addition – conquer it with our Destiny 2: Eater of Worlds guide.

From the ‘Up and Up’ adventure in the Infinite Forest, aRedditor was able to glitch into an area that contains a mysterious floating corpse. Examining the body close-up reveals the Roman numeral for 14 on its armour. These assets are too detailed, and the tomb’s internal spatial logic too consistent, for it not to be used, meaning we’ll probably be able to access it at some point in the future.

A previous datamine suggests that a quest triggers when all 12 weapons from the Infinite Forge have been crafted. That’s going to take a hell of a lot of grinding the new Mercury public event, and we haven’t yet heard of anyone pulling it off.Perhaps that quest takes us into Saint-14’s tomb, or perhaps it’ll be unlocked in later DLC or a patch. We’d guess the former, since Saint-14’s story is linked with that of his renegade friend, Osiris. 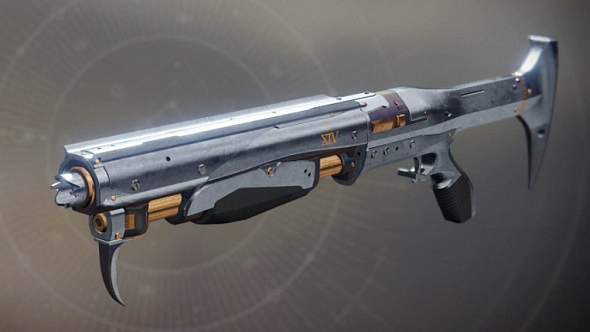 Anyway, after all that work, the reward appears to be the Perfect Paradox shotgun, which you can viewin Destiny 2’s database. The lore tab links it with the Inifinite Forge, and you’ll note the Roman numerals stamped on its side. Perhaps surprisingly given how much work it takes to earn, it’s a Legendary, not an Exotic.

That lore tab, by the way, is an admiring and grateful note from Saint-14 to you, which is rather touching given how esteemed he is. More of his story and personality is unfurled through his ship, Saint-14’s Gray Pigeon, and the reissue of his helmet– we won’t spoil it for you, but it’s pretty cool. I’ll just pause to lament, once again, that Destiny’s in-game storytelling never really matches this deep lore.