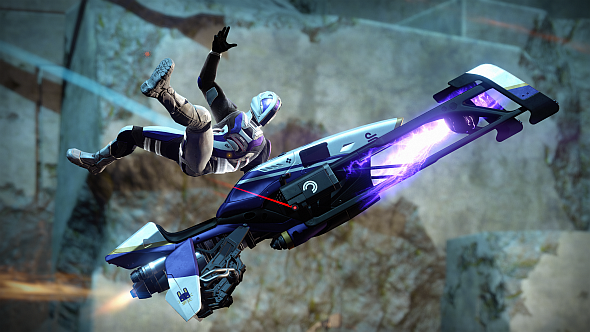 The Sparrow Racing League (SRL) is probably returning to Destiny 2, according to voice lines datamined from the PC beta. No, it doesn’t involve bird-baiting – Sparrows are Destiny’s jetbikes.

Discover the planets you’ll be racing on in our Destiny 2 world guide.

JpDeathBlade posted the relevant lines to this Reddit thread– they’re blocked out to avoid spoiling anything. Apparently, Destiny 2 features people watching SRL races on TV, and some NPCs can be heard asking if it will come back. The fact that it’s referenced in the game at all means a return is likely, and it has become a bit of a Destiny tradition – the first SRL was a three-week event around Christmas 2015, and it returned at the same time last year. So we can probably expect it to debut in Destiny 2 this December.

In the original, SRL saw you race your Sparrow against five other players, with the first to cross the line after three laps. Hitting gates on the track boosted your speed, while shortcuts and AI enemies kept things interesting.

In terms of rewards, SRL got its own gear, which dropped at high levels and at a generous rate. Shipwright and mechanic Amanda Holliday served as the event rep, with her own quests and reputation system, and there was a large ‘record book’ that tracked your achievements, dropping gear when you hit certain thresholds.

There’s plenty more in the datamine, including details of hardcore PvP mode Trials of the Nine, and a whole ton of story spoilers. If you hate surprises, click here to read everything, but if you want to know all about Trials (and other Destiny PvP modes) without ruining the story, check out our Destiny 2 PvP guide.