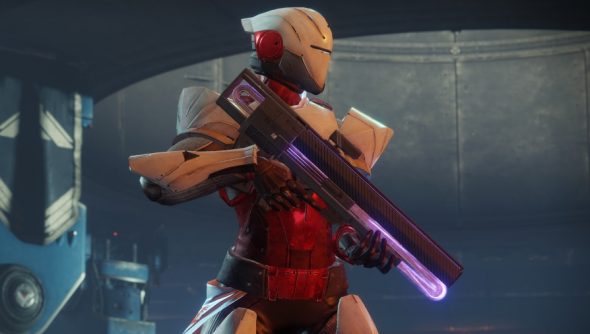 What are the best Destiny 2 PvE weapons? Throughout the first year of Destiny 1, one weapon towered above all others: Gjallarhorn. It was a beautiful rocket launcher with a cluster of homing bombs in every payload, which did almost as much damage as the initial blast. This made it hands-down the highest-DPS weapon in the game and mandatory for its challenging raids.

We’ve been keeping an eye out for any weapons in the sequel that rise so high, and these are the closest candidates – the guns at the top of the PvE meta, the ones every raid team want you to bring. These are the boomsticks that will keep you alive in Destiny 2’s hardest quests and challenges, and the ones that will absolutely devastate lower-level foes.

If weapons are exactly your kind of thing, you’ll find plenty to love in the PC’s best first person shooter games.

Our lineup of essential weapons include something for everyone, from powerful exotics that will punch a hole straight through a line of Cabal warriors, to legendary rifles that will become your trusty sniping tool. 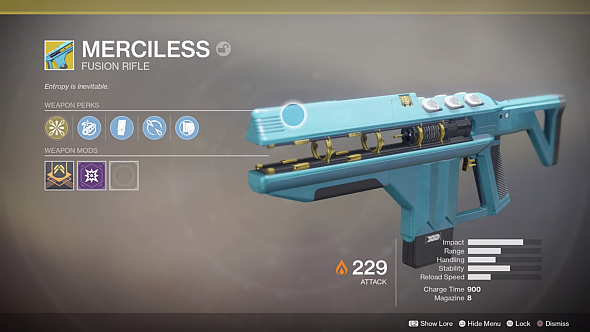 There’s no guaranteed way to get Merciless; it’s an engram drop or a Xur sale (indeed, Xur has already sold it once). So, much like Gjallarhorn, you’re trusting to luck.

Which is a shame, because the Gjallarhorn comparisons don’t stop there. Like the famous rocket launcher, Merciless probably has the single-highest DPS potential of any weapon in the game right now. It’s a fusion rifle with an eight-round magazine, and its unique perk will cause subsequent blasts to charge more quickly if earlier ones don’t kill their target. This makes it ideal against bosses with large health pools – by the bottom half of the mag, it charges almost instantaneously.

It doesn’t have much reserve ammo – your second and last mag is only six rounds – but its fire rate means you can fire all fourteen of those shots in any of the raid’s damage phases, and that’s pretty savage DPS. Use it on the censers, use it on Calus, use it on the warhounds in the Pleasure Gardens. 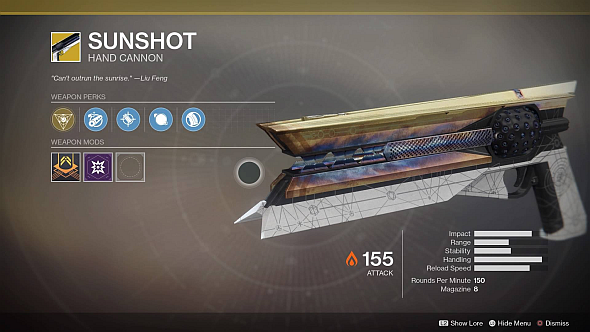 Sunshot is a terrific add-sweeper for general-use PvE. Each kill will trigger a surprisingly powerful explosion, and kills resulting fromthatcan trigger further blasts. You can wipe dozens of weak adds with just a couple of rounds – it’s an ideal solution for swarm enemies like Hive Thralls and Cabal war dogs. Its handling and reload speed are also excellent, meaning lots of uptime – another important factor when battling swarms of adds.

Regular Cabal mobs tend to be stronger than others, but that only means it’s better against other races than that it’sbadagainst Cabal. If you can get it at high enough power, it’s a fine choice for the Castellum and Baths fights in the raid, where add control can be a challenge. It’s also an excellent pick for certain Nightfall strikes. 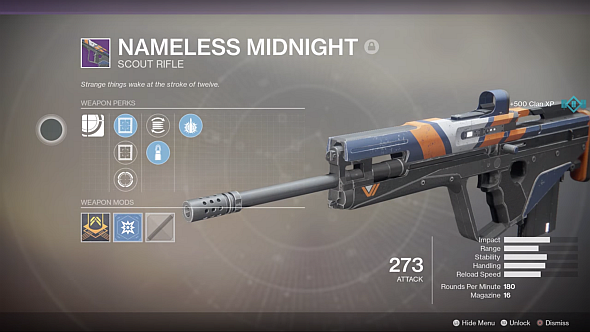 Nameless Midnight has emerged as an early favourite among PvE Legendary weapons. Thanks to its explosive payload perk, each round will cause a small explosion – the blasts are weaker than Sunshot’s, but as a scout rifle, Nameless Midnight has a big edge in range and accuracy.

As a Legendary weapon, you can run Nameless Midnight alongside an Exotic, and you can add or remove its weapon mods to equip it in either the kinetic or energy slots. Pair with Merciless more or less anything else for a great raid loadout.

You’re offered a choice between Nameless Midnight, Origin Story, and Nightshade when you complete Zavala’s strike milestone. This is a much harder choice than the Sunshot one, because all three are great guns. They’re all Vanguard weapons though, so whichever you pick, you have a chance at acquiring the others from Zavala’s reputation packages. 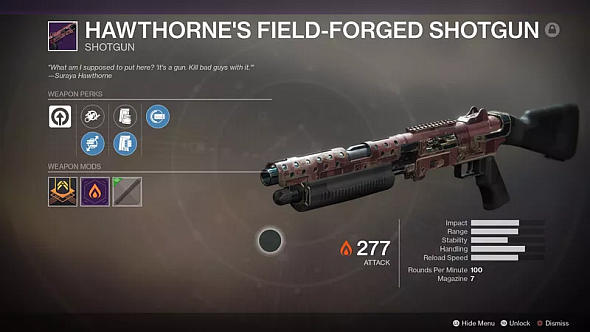 If you’re after DPS in the power weapon slot and don’t have a Merciless, or are already using your Exotic option elsewhere, Hawthorne’s shotgun is probably your best shout. It’s fully automatic, so you can chuck out shells like it’s going out of style. As a shotgun its range is limited, so in the raid this is a good option in the Pleasure Gardens, but not for the Royal Pools or Calus. In general PvE, it’s a great Legendary pick for DPS against any boss you can safely get personal with – Fallen walker tanks, for instance. 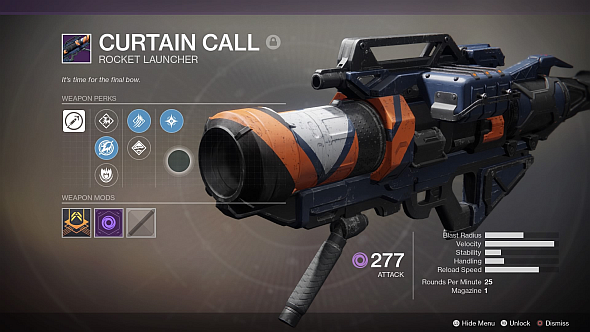 Curtain Call’s big trick is its cluster bombs, which, like Gjallarhorn’s, add a surprising amount of damage after the gun’s initial blast. They don’t track targets, so results can be inconsistent, but will rarely disappoint. Combined with its high velocity and reload speed, you have an excellent launcher, and as a Legendary, you can pair it with your choice of Exotic.

We need to come back to those cluster bombs though, because you genuinely might not believe how powerful they are.Testing by YouTuber Datto found that Curtain Call is actually one of the best weapons in the game for the raid’s tricky Pleasure Gardens encounter: with 60 empowering spores, if you shoot a rocket between the hind legs of a hound so the bombs land just right, you can take 95% of their health withonly two rockets.That’s better damage than Merciless. It may be one of very few occasions where you can place the bombs so precisely, but still. Damn.