Around the time of E3, Destiny 2’s director, Luke Smith, told Glixel that Bungie wanted to “unhide the fun” in Destiny. One of Bungie’s goals has been to make the sequel more readable: players should understand their options at any given moment, without having to jump out of the game in search of progression tips.

What else has changed? Here’s everything we know about Destiny 2.

The changes are welcome for the most part. Public events are now the most efficient route through the usual mid-game gear grind, and now that they’re handily marked in your in-game UI, farming them is a breeze. I once tried to do the same in the original, for some quest or other, and it was miserable.

Back then, public events had a fixed schedule for when they could occur, but there was never any guarantee that they would, and other players were a much less reliable presence due to this uncertainty. Using third-party apps to chase the schedule felt like rushing to get to a party only to find it’s not happening (or, worse, that you’re the only one who turned up). Not fun.

That said, there’s value in keeping some secrets. Bungie clearly understands this when it comes to the raid, but outside of that encounter, their philosophy of “unhiding” stuff has been applied pretty indiscriminately.

This brings me to Xur. When leaks from the game guide revealed that the mysterious Exotic vendor could potentially appear on any of the game’s four planets, the community assumed he was about to get even more elusive. I saw some weariness, but tinged with affection, even excitement – eye-rolls, but with a smile. 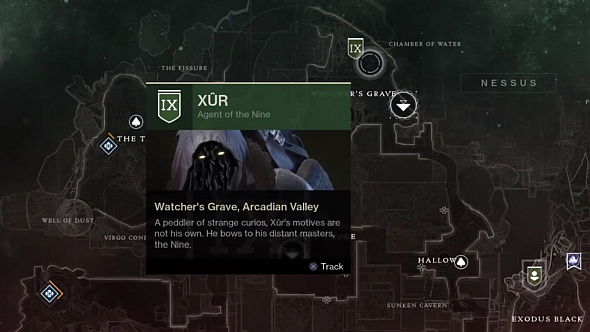 That anticipation has been undone with his debut today, for Xur, too, has been unhidden: his location is marked with a clear icon on your in-game map. Finding him is the work of about 30 seconds, as you can see in the video above. I’m not sure this is a good change.

Xur is not the same as a public event. He’s not flighty: he appears every weekend like clockwork, and stays in one place until the appointed time. Unlike the original’s mercurial public events, Xur won’t let you down. It never took Reddit’s megathread or whereisxur.com too long to find him, so the inconvenience for players was minimal, and the fact that he appeared with no ceremony gave him an in-universe air of mystery that’s important to his character. Now that he’s recognised in the UI, Xur feels like part of the Destiny establishment. This is, I think, a higher price to pay for a marginal gain in convenience than Bungie have reckoned.

But if that seems trivial, there’s a more considerable community impact. A quick Google search will show you how many YouTube channels and games sites title their Xur videos “where is Xur?” It’s likely the most-asked question about anything in Destiny, and now there’s no point asking it.

Xur inventory reviews probably won’t disappear, as new or casual players still need to know which Exotics are worth their shards (this week: Merciless). But there are sites whose sole purpose is to be the fastest to tell you his location. Their raison d’etre has just been obviated, along with the public event trackers, the dead Ghost trackers, and the third-party LFG sites.

That’s the most puzzling aspect of all this. Community engagement with Destiny has been one of Bungie’s design focuses from the start, and a point of pride when it started happening – the studio’s weekly update highlights community content, awarding special emblems for the best fan video each week.

Granted, many community sites stepped in to fill holes that probably shouldn’t have existed in the first place. It’s probably not the kind of engagement Bungie want. But “unhiding” Xur is quite a lot of baby to throw out with that bathwater.