How do you get the Destiny 2 Tarrabah? We knew there would be another raid exotic with the introduction of the Crown of Sorrow raid, but it’s never certain that the reward will be a good one. In this case, however, it appears the grind will be worthwhile as it’s an Exotic SMG, and weapons of that ilk are currently in a good place within the PvP and PvE meta.

The Exotic SMG is called Tarrabah, and its Exotic perk is called Ravenous Beast. The perk works by storing power when you deal or receive damage. Once the orange indicator, which is on the side of the gun, is full you’ll need to hold reload and you’re damage and fire rate will increase substantially. Tarrabah’s other unique perk is called Bottomless Appetite, and it works by extending the duration of Ravenous Beast if you deal continuous damage.

Throughout this guide, we’ll go over how you can get your hands on this Exotic, and how you can improve your luck. Enough dawdling, here’s how to get the Tarrabah raid exotic.

How to get the Tarrabah Exotic SMG

There’s only one way of getting this Exotic SMG, and it’s by beating the Gahlran encounter in the Crown of Sorrow raid. If you’re looking for ways to beat the final raid encounter, then our handy Destiny 2 Crown of Sorrow raid guide will point you in the right direction. 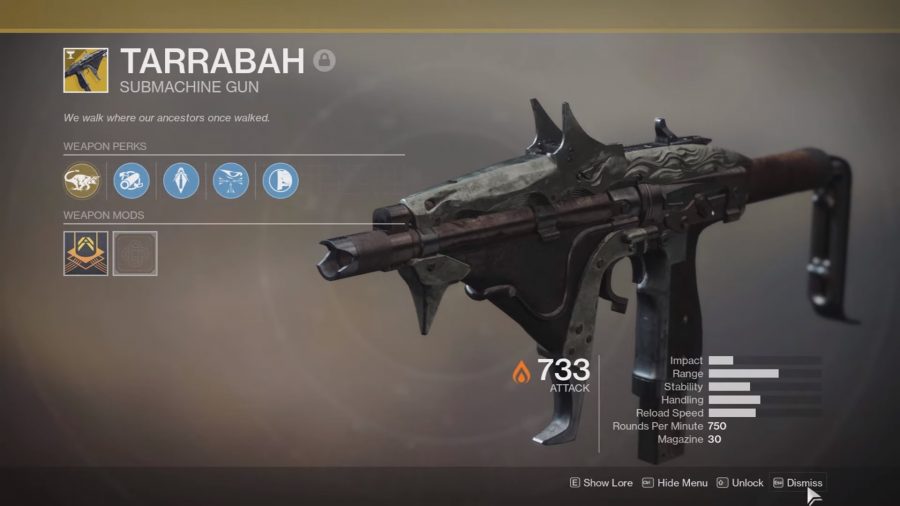 While the first team to beat the raid are guaranteed to get the drop, the rest of us will merely have to pray to RNG-esus for it to drop. On top of that, you can only get rewards from the Crown of Sorrow raid once per week, so grinding can be a bit of a slog.

There are a few ways you can speed up this process, however. First off, you’ll want to work on having three characters that are high enough Light Level to do the raid. This way, you have three chances per week of doing the encounter getting it to drop.

Here it is: One Phase Gahlran Kill on day one. pic.twitter.com/mEv7wvFGYd

On top of that, players are also finding ways to get through the Gahlran fight in just one phase. Check out Gladd’s video above to see for yourself. One of the keys to the strategy is obtaining the Mountaintop legendary grenade launcher, which is the crucible pinnacle weapon from the Season of the Forge.

And there you have it, how to get the Tarrabah Exotic SMG. You’ll have a bit of a grind on your hands to get the new raid exotic, but with SMG’s being in a good spot in the meta, it looks like it’ll be well worth the grind.