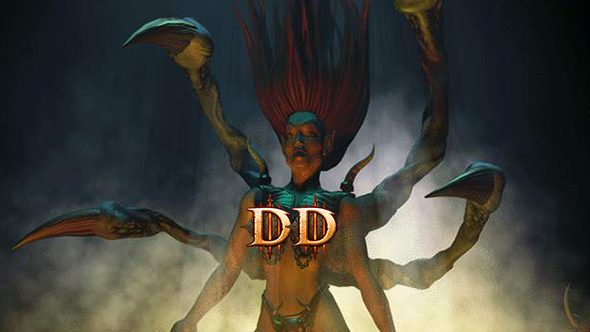 Diablo II is one of the most beloved entries in the Blizzard canon, and at least part of that is due to its memorable monster design. The game’s creatures are typically threatening, demonic, gross, or otherwise unpleasant, but a select few fall into an extra category – sexy.

That includes Andariel, the final boss of the game’s first act, who appears with some monstrous appendages, but the general shape of a Frank Frazetta-approved human woman, complete with bits of a metal bikini and a superfluous chain connecting nipple piercings. Kris Renkewitz did the initial design, emphasizing Andariel’s size and silhouette, while Phil Shenk reworked that design into the metal album sex symbol the demon eventually became.

We’ve got a list of the best sex games on PC whenever you’re in the mood. No demon sex, but there is an encounter with an animated corpse.

Making monsters sexier was a directive during the game’s development. A spreadsheet from design lead Erich Schaefer specified certain types of monsters that were needed for the game, across categories ranging from “small” and “large” to “spell-casting” and “melee.”

“And then one of the categories was Topless,” Phil Shenk says. “They said, ‘Yeah, we need a certain number of topless monsters,’ because they’d all liked the succubi in Diablo.”

This comes via an excerpt of David L Craddock’s upcoming Blizzard history, Stay Awhile and Listen: Book II, as published on Shacknews. The book covers Blizzard development through the late 90s and early 2000s, and Craddock provided us with another excerpt recounting some of StarCraft’s development history, laying the struggle – and crunch – involved in bringing that game to market.

Stay Awhile and Listen: Book II is currently open for backing on Kickstarter, if you’re interested in supporting the project.