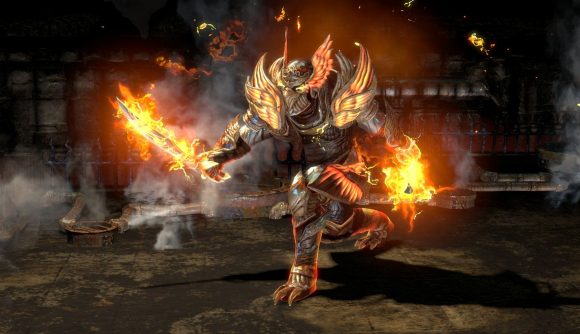 November 21, 2018 Blizzard just asked the person who registered ‘playdiablo4.com’ and redirected it to Path of Exile’s website to cut it out. It now redirects to a Google search for ‘phone’.

Redditor Zeiin – a frequenter of the Path of Exile subreddit, coincidentally – posted last night that they’d received an email asking if they’d “be willing to sell the domain at a reasonable price”. Three hours later, Blizzard’s lawyers advised them that they were committing “an obvious act of cybersquatting and trademark infringement”. They asked Zeiin to take down the redirect and transfer the domain to Blizzard, because they “couldn’t see a reason” Zeiin would keep it except for commercial purposes.

Zeiin says they refused to transfer the domain – “paid for it and don’t want it taken over nothing” – but would hand it over for free if Blizzard is going to actively use it for something that falls under its trademark. Hint, hint.

Zeiin has had to change the redirect, however. Rather than sending you to the homepage of a direct competitor to Diablo, it now sends you to Google, which seems harmless enough. But Zeiin has managed to sneak in another joke: the redirect is to a Google search for ‘phone’.

Here’s Zeiin’s post on Reddit. It sounds like both sides are taking the exchange in good humour: Zeiin defends Blizzard, pointing out that while “Blizzard did find the joke funny” they also needed to do this “to minimise harm”, and their legal team isn’t bullying them about it.

Anyway, in case you’re not sure why the new joke is funny, the whole thing started because of the controversial announcement of Diablo: Immortal at BlizzCon earlier this month.

Rumours of a major Diablo announcement at BlizzCon had been bubbling merrily for some time – a forum post suggested there would be news of some kind, which is perhaps why fans seized on a job ad for “a new, unannounced Diablo project” earlier in 2018, and especially on the schedule for this year’s BlizzCon. In the event, what we got was Diablo: Immortal. A new game, yes, but a mobile game, which Blizzard has “no plans” to bring to PC, according to Wowhead’s write-up of a Q&A at the show.

The backlash among the Blizzard faithful has been severe. The Diablo subreddit filled with threads saying things like “not even a Diablo 2 remaster”, and “Diablo on mobile is a slap in the face”, while someone at the Q&A even asked “is this an out-of-season April Fool’s joke?”

But Diablo fans can take heart. As anticipation soared ahead of BlizzCon, Blizzard published a blog managing expectations, in which it was announced that the studio has “multiple teams working on different Diablo projects.” Diablo: Immortal is one, and a Diablo 2 remaster is also practically confirmed. And on the subject of a fully-fledged sequel, that’s almost definitely what Blizzard is promising here:

“We know what many of you are hoping for and we can only say that ‘good things come to those who wait,’ but evil things often take longer.”