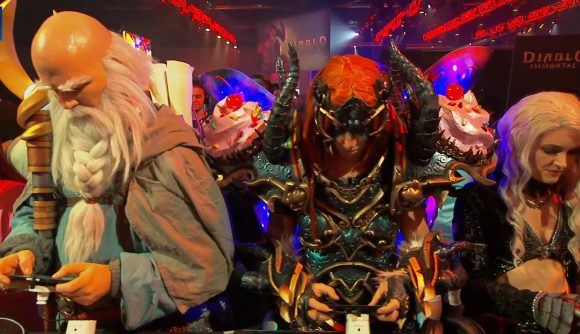 Yes, we all but knew it would happen, but it still stings a bit. BlizzCon saw the announcement of a new Diablo title, but it’s one built exclusively for mobile devices. It closed the BlizzCon opening ceremony, and while a new mobile title isn’t exactly a bad thing, in the absence of a Diablo 2 remaster or Diablo 4, it’s gonna be a tough sell for fans.

Diablo Immortal the game explores 20 years of untold stories between Diablo 2 and Diablo 3, including explores what Deckard Cain was up to in that time, along with other questions about the lore in that time frame.

The gameplay footage should all look pretty familiar to Diablo 3 players. There are six classes ranging from Barbarians to Necromancers, though there are new abilities, as well as new zones, stories, and dungeons. We’re promised “authentic Diablo gameplay at your fingertips” – though on mobile, it’s not quite so authentic as old-school Diablo fans might’ve hoped.

Blizzard assures fans that Diablo Immortal will be a proper Diablo experience, though there’s more than a little skepticism around that promise – somebody’s even set a Diablo 4 URL to redirect to the Path of Exile website.

A mobile Diablo title is by no means a bad thing, and Immortal looks pretty good on its own terms. But even though Blizzard took pains to head off speculation about a Diablo 4 BlizzCon announcement, people were hoping for something more traditional – a Diablo 2 remaster, at least. Instead, Blizzard closed the keynote with Immortal, leaving many with a feeling of ‘that’s it?’ as the show properly began.