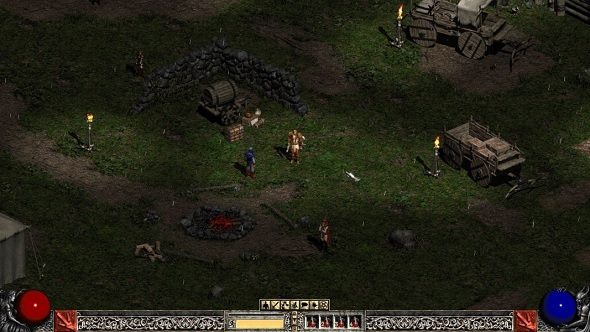 Almost 17 years on from the release of Diablo 2, modders are still refining and upgrading Blizzard’s seminal action RPG. Arguably the game’s most popular mod, Median XL has just received a new update which increases monster aggression, raises the level cap to 125 and generally makes Diablo 2 even more challenging.

Looking for adventure? Check out this list of the PC’s best RPGs.

It’s not all gruelling difficulty however, as this update to Median XL also adds various quality of life changes to smooth out certain rough edges from Diablo 2. Adventurers now auto-collect money dropped from monsters and drop rates have been rebalanced so players should actually see some rare items while questing. New gems and cube recipes have also been added, along with 35 new skills so adventurers can really mess around with creating new class builds. If you’re a hardcore Diablo player, there are 40 new uberquests to test your mettle, along with special expert challenge and uberbosses that will push your skills to the limit.

The actual changelog for Median XL is huge, containing tweaks to every class, Act and enemy type, along with “highly conceptual” changes to Diablo’s combat system. I’m not joking when I say “highly conceptual”, some of the changes talk about how attack animations have been lengthened by a single frame for balance purposes. If you’re someone who has been playing Diablo 2 for almost 17 years, you’ll love pouring over these intricate notes but for someone who just wants to jump back into Diablo 2, just know that it is a harder, but more rewarding experience. Some of the endgame bosses are absolutely brutal, so get used to being one hit killed if you aren’t careful.

Should you wish to give this mod a whirl, all of the information on how to download and run it can be found here. If you do have any Diablo 2 saves that you want to keep, do back them up as the sweeping changes made by Median XL could mess with your old runs.