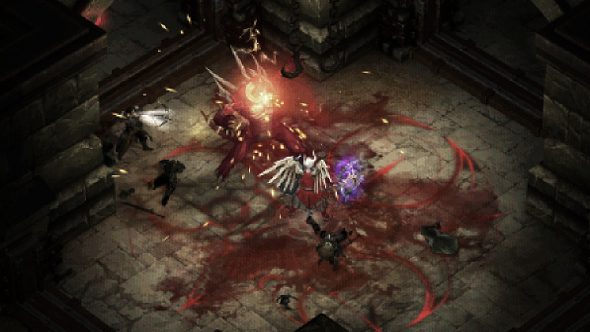 To celebrate the 20th anniversary of the first Diablo, Blizzard have recreated the game in Diablo III, tasking players with descending through 16 monster-infested areas, until they finally get to clash with the big bad himself. Well, that was what was announced at last year’s BlizzCon. The reality doesn’t quite live up to what originally sounded like an incredibly ambitious project for a free and temporary event.

The Darkening of Tristram is, essentially, a Greater Rift. Head over to the Old Ruins in Adventure Mode, jump through a portal, and you’ll find yourself battling your way down familiar caves and Nephalem ruins that you’ve seen countless times before.

Like the tilesets, the vast majority of enemies are from Diablo III, as are most of the largely disappointing items that explode out of their corpses like shimmering piñata sweets. I’ve scrapped or sold most of them. Even the special weapons, a couple of which come with a skin for transmog, are pretty terrible. Indeed, they’re usually blue, and ultimately proved to be useless even for my new Barbarian. 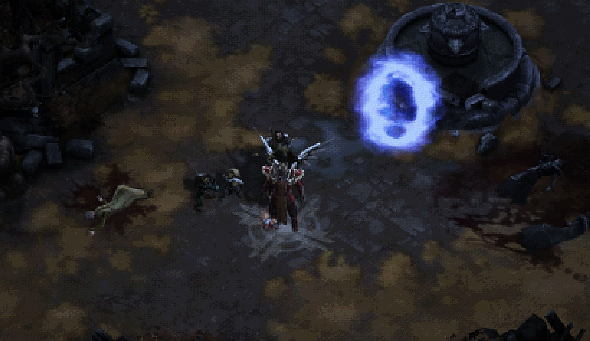 Mechanically, things remain unchanged as well. Healing orbs, unlimited potions, the easy, breezy difficulty – all have been retained from regular Diablo III. Blizzard recommend making a new character, which is understandable because playing The Darkening of Tristram with your max level heroes offers nothing but a brief sense of nostalgia – exceedingly brief, since you’ll be able to run through it in around 20 minutes.

Unfortunately, there’s no tremendous imperative to make a new character, either. Most of the items you get will be ditched the next time you take on a normal Greater Rift, and you’ll spend an hour or more trudging your way through stuff you’ve already experienced. It’s more of a challenge, though, and there are extra rewards for finishing it with a fresh hero, including a hideous but adorable pet version of The Butcher.

There’s the occasional surprise, too. For instance, if you properly explore each level, you’ll encounter bosses and areas drawn from the original game. You might stumble across the Halls of the Blind, where invisible enemies assault you in the pitch black. And you’ll fight the likes of the aforementioned Butcher, complete with his Diablo I model, among other bosses from the first game. It’s a shame, though, that most of these encounters end without any fun rewards. 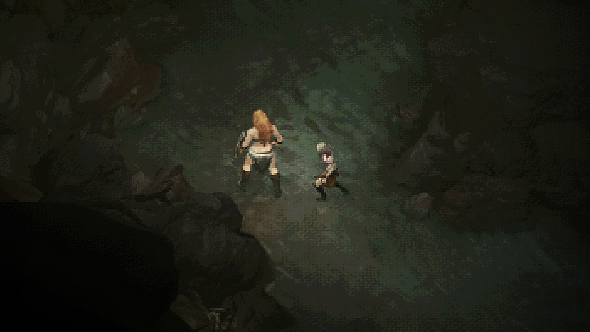 Rather than being Diablo recreated in Diablo III, it’s a pretty basic dungeon with a nostalgic filter. A literal nostalgic filter. The moment you jump through the portal, a pixelated effect is slapped across the game, making it look vaguely like the first game. I say vaguely because aside from some of the bosses, the models are all Diablo III models, and the dungeon itself looks nothing like the original’s randomly generated labyrinth. That old-school filter, along with your character’s ‘retro’ 8-way directional movement, feel like a half-hearted attempt to summon the old Diablo I magic.

However! I did manage to eke out some enjoyment. Not for the whole dungeon, which wore out its welcome after 30 minutes, but in the occasional nods it makes to the first game that served as a reminder of how exciting or entertaining it was to play two decades ago. When I came across Zhar the Mad, still poring over his mystical tomes, I remembered how I felt bad for killing him when all he wanted was to be left alone and for me to stop mucking around in his library. It takes surprisingly little effort on Blizzard’s part to conjure up these memories.

Nostalgia is a powerful force, and that’s something Blizzard are keenly aware of. But the Darkening of Tristram isn’t a good example of the developer leveraging the power of its back catalogue. Let’s face it, the original isn’t all that fun to play now – but it could have still been a delight to revisit it if there’d been enough of the old game to deliver a real nostalgia hit. Sadly, there isn’t. 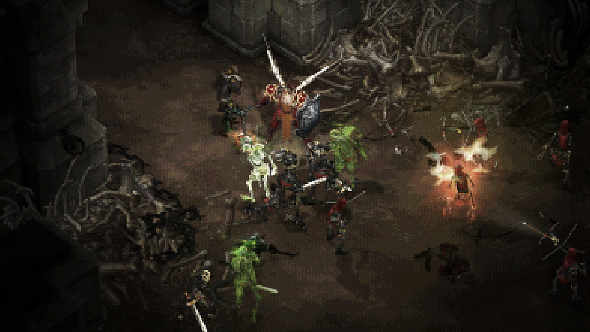 Exploring the dungeon, fighting these enemies… it didn’t feel familiar because I remember doing it 20 years ago. It felt familiar because I did it last night. In another Greater Rift. And I got better loot, too. It’s not a very good approximation of the first game, and it’s not a particularly good example of a dungeon from the third. So it doesn’t really cater to anyone.

It’s not helped by the fact that Blizzard’s original announcement has generated months’ worth of excitement. If it had been a surprise, like an April Fool’s gag for example, then it probably wouldn’t have disappointed me nearly as much. Indeed, I would have been pretty pleased.

It’s free, at least, so that’s nice. And I can’t deny it’s novel watching my hero stalking the Cathedral halls with a stern, “I refuse to run anywhere” gait again. But there’s so little of Diablo in this event. 20 years ago, I don’t remember anyone saying, “My favourite thing about Diablo is the graphics.” Then again, I don’t remember much about being 11.

The Darkening of Tristram is available to everyone with the Reaper of Souls expansion, but only once you’ve completed the campaign.