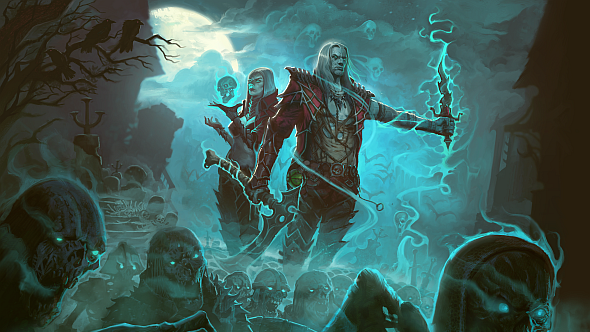 Five months ago at BlizzCon 2016, it was announced that the Necromancer class would be added to Diablo III in “the second half of 2017” as paid DLC. We learned yesterday that a closed beta for the new class is now live, so it seems Blizzard are bang on schedule.

Fancy getting in on Blizzard’s loot-fuelled dungeon crawler? Get some ideas in our list of Diablo 3 builds.

The news was announced on the Diablo III forums, and there’s a separate announcement giving a thorough overview of the Necromancer’s skills and playstyle. Necromancers wield poison and cold in a range of close- and long-ranged spells, can deal direct damage by sacrificing their own health using Blood skills, or can manipulate corpses to create traps, weapons, or a personal army of undead minions.

The closed beta is part of the latest patch, version 2.6.0, but you’ll need an invitation to participate. To opt in, login to your Blizzard account, go to the Beta Profile Settings page, and check ‘Diablo’ to register your interest in Diablo III beta tests. You’ll receive an email invitation if you’re selected to take the Necromancer for a spin. Check this announcement for full instructions and FAQs.

Patch 2.6.0 also adds Challenge Rifts to the game and new features in adventure mode, such as two new zones (The Moors and the Temple of the Firstborn); set dungeons with an updated UI; and four new waypoints in Act IV, each with bounties to complete.