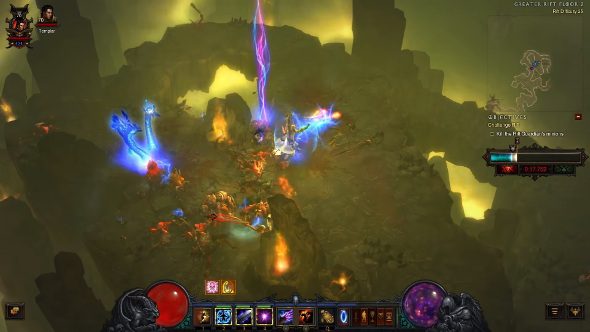 Diablo III’s Greater Rifts embrace chaos – you never know what you’re going to find, from the setting to the foes. Not so, however, with the upcoming Challenge Rifts, which were announced last year and are finally making their way into the game with patch 2.6.0. Essentially, they’re static Rifts based on a snapshot of another player’s run, letting you go through the same challenges, with the same gear, to see if you can do better.

For more dungeon romps, take a gander at the best RPGs on PC.

So a Challenge Rift is an exact copy of someone’s Greater Rift run. Enemy placement, traps, bosses – it’s exactly what that other player experienced. And you’ll be playing with their character, too. Or at least a clone. The same equipment and abilities they used to take on the Greater Rift will be yours.

The idea is to beat the original player’s time, and if you manage it, you’ll be rewarded with bounty and crafting materials along with some blood shard.s

“To truly conquer Challenge Rifts and prove you’re the best of the best, you’ll need to be on top of your game by exhibiting your skills, game mastery, and class knowledge,” Blizzard says. “While there is certainly strategy to pushing as far as you can in Greater Rifts, the strategy to becoming a champion of Challenge Rifts focuses on execution. Spending time to get to know the map, spawn locations of enemies, and pylon locations may completely change your approach to improving your time.”

Challenge Rifts are the passion project of senior game designer Adam Puhl. “I’m really hoping it’s an opportunity for players to hone their skills, sharpen their reactions, or polish their resource management,” he says. “It’s also a great opportunity to highlight build diversity. Not every skill will be in a top build, but that doesn’t mean there aren’t a lot of fun ways to play Diablo.”

Challenge Rifts are available in the Necromancer beta, and will hit the game properly with patch 2.6.0.