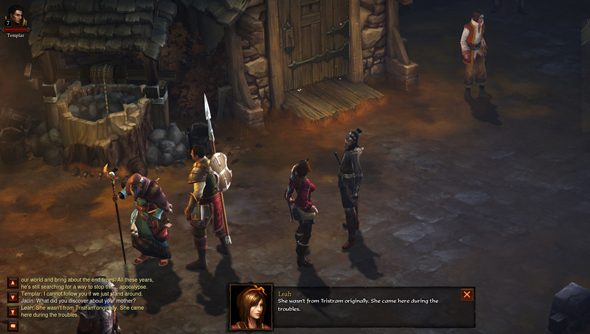 Suddenly, it makes sense. Why, in the early days of Diablo III, did Blizzard hire Leonard Boyarsky – one of the originators of the Fallout series, and later lead developer on Vampire the Masquerade: Bloodlines – to head up story on a linear action RPG?

Here’s why: an early version of Diablo III had a branching narrative, and a sliding moral scale that opened up new player choices. But it was not to be.

Boyarsky has remained Diablo III’s lead world designer for the past eight years – but in that time he’s come to believe that “you really can’t have an action RPG that has player choice”.

“It’s because it moves quickly, but I think the bigger issue has to do with multiplayer,” he explained. “Because if we offer you two different paths and I want to take a different path to my friend, how do we then reconcile that?”

Boyarsky noted that other multiplayer RPGs released since Diablo III have attempted solutions to the same problem – but in the process rendered choice-making “very superficial”. And that’s not something the man who designed Fallout 1’s endings is interested in.

“If I’m making an RPG where you have choice, I want it to matter,” he said. “And it was really not possible to make it matter and to make this game.”

During Diablo III’s development, the story team would have multiplayer meetings every two weeks – and every time they’d leave with “headaches and no answers”.

“Because every time we came up with a solution it was like, ‘Well, what happens when your friend does this’,” said Boyarsky. “We just never really came up with a good solution.

“If you’re making an action RPG, especially a multiplayer one, it really makes it impossible to go down that road.”

Players would have had branching conversation choices – and a ‘corruption’ system would have seen players gain access to different conversation options as their characters fell from grace.

In the end, though, Boyarsky and his colleagues told a linear story that was easily skippable for the portion of Diablo’s playerbase who were solely interested in loot.

“I think eventually we came down too hard on the side of the players who didn’t really want a lot to do with the story,” said Boyarsky. “And that was very problematic because our story started out as something a lot more complex than we could probably tell in the context of what we were doing.

“And instead of us realising that soon enough and really stripping that down, we continued to try to tell that story.”

Do you think it’s possible for a multiplayer RPG to offer a branching narrative without compromise? The Old Republic picked from conflicting player responses with a roll of the dice – while Divinity: Original Sin has more recently made cooperative conversations one of its calling cards.