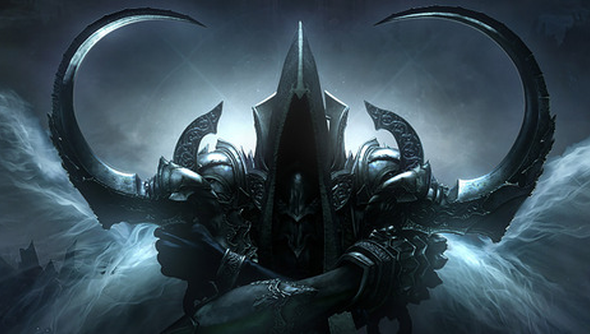 The Reaper, in Reaper of Souls is Malthael, an angel, and death incarnate. But Malthael brings new life to Diablo III. An action-RPG mired in controversy for over year suddenly feels fresh, exciting, and relevant. Diablo III is alive. Reaper of Souls is essential. But like the Angel of Death, Reaper of Souls feels a bit gaunt when it comes to new content.

Here is the story so far: it is one of 180 degree turns. Diablo III launched with a plan to save gamers from trading scams. All players would be able to buy items earned from the game with real-world money and gold. Instantly, the mechanic that drives Diablo forward: the earning of interesting new loot and armour through play, was devalued. Compounding the problems: a drop system that left players high and dry without the gear they needed to compete. The auction house, rather than saving players from trading scams, turned Diablo III into a game of bargain hunter, rather than demon hunter.

So Reaper of Souls is part of a reversal. As part of a patch available separately, that auction house has now been stripped out. A better loot system offers more rewarding drops. And there are some new community features. All of the above has been made available to all players.

But Reaper of Souls is still essential for most Diablo players. It includes a new (extremely short) story act, a new class, the Crusader, and Adventure Mode: a way to play Diablo that doesn’t require you to endlessly repeat the story. 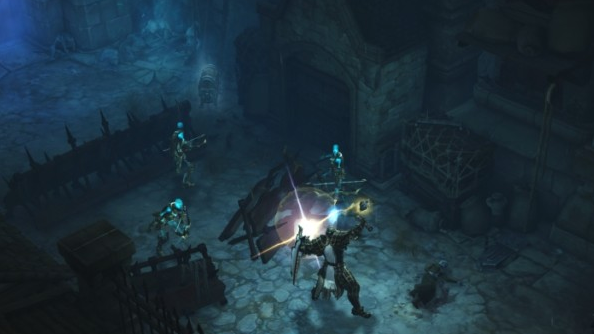 By the end of Act IV, Diablo is imprisoned within a Black Soulstone. The world is saved. There is dancing. In Act V, Malthael steals that soulstone, and starts murdering humans. Because humans have demon blood, apparently.

It takes place in Westmarch, a gothic fortress and one of the last bastion’s of humanity. Later, you’ll move to more traditional demony places: the Battlefield of Eternity, where angels and demons are locked in endless war, and umm, Pandemonium. Which has less bamboo than you might expect. Act V is significantly better designed than previous DIII acts: levels are filled with way more sidequests and secrets, it’s more rewarding per minute of play, and it’s a brisker storyline.

There’s a smattering of new monsters, too. Death Maidens – Angels that serve the will of Malthael – stalk Westmarch with their oversized scythes. Boggits are race of mischievous swarmers: that can infinitely replenish their numbers unless you push against their combo of breeders.

Act V’s menagerie has a little more life to it: when a friend’s hardcore character died on the road to level 70, an overgrown undead hound calmly pissed over his twitching corpse.

But there’s a problem with the new Act.

I savoured every moment of the campaign. I read every dialogue, explored every corner, and spent as long as possible enjoying this world. Even so, Act V ended within four hours. Act V may well be one of the longest acts in the game so far, but, if you’re playing Diablo III for the story, there is barely any of it.

It’s not the end of the game, though. Reaper of Souls’s big idea is “Adventure Mode”.

If you enjoy playing games with friends, check out our ten best co-op PC games for more.

Adventure Mode turns Diablo III into an endless dungeon runner. The whole world is opened up ripe for your for plunder. The map gives you access to every single waypoint in every act. Most of those points have bounties – randomised objectives that task you with killing a certain unique elite, complete an event, eliminate a boss or cleanse the new Cursed Chests/Shrines (Diablo III’s new weird little horde mode) that are peppered around the world.

Achieving these bounties awards you with plentiful experience and gold, while doing the whole act worth will give you a nice bonus including a Horadric Cache (more loot), Blood Shards (a way to gamble for more loot) and after you’ve collected five key fragments, a chance to run a Nephalem Rift.

Nephalem Rift’s are Diablo III in beast mode. Think of them as the culmination of an hour’s adventure: a level bursting at the seams with Elite monsters and extra loot and rare spawns. It’s where Diablo III let’s its hair/horns down, and says, “go nuts. You earned this fun.”

They are chaotic, stupid, and relentless, and you leave them on a dopamine high.

The point is: we now have a choice when it comes to how and where we want to spend our time within Diablo III. You can stick with running through the story line and be rewarded with a guaranteed legendary at the last boss. You can play in Adventure Mode and switch between bounties and rifts. You can even just go where ever the hell you like using the opened up waypoints. Levelling up a new character just got significantly less laborious.

Enter the Crusader. The Crusader is a tank: a religious warrior that uses holy wrath to smite his enemies. You will be smitten, too. He/She feels like a throwback to the Paladin class from Diablo II. A mid-range melee combatant that uses his signature flail and shield combo, he’s also capable of engaging outside of melee range with a selection of spells from the heavens.

I’ve tinkered around with my Crusader on hardcore and he really is special. I was worried that without the passive 30% damage reduction that Barbarians and Monks share, he would end up surprisingly fragile. I was wrong. He is a brute, making better use of Diablo III’s ragdoll physics than any class before him. He’s relentless: every time I think I’ve overextended or been about to die, he’s just able to come back from the brink.

My only criticism is that the male voice actor just doesn’t fit his role in the slightest. You expect a stern yet calm voice, but this isn’t the case. Eventually, I just found his asking me for “patience” to be condescending; teeth-grinding stuff.

Reaper of Souls is Diablo III at its best. Act V is a tiny sliver of new stuff, but the heart of D3 is now Adventure Mode. Though it re-uses old world assets, it remixes them in consistently surprising ways.

You have to admire Blizzard’s approach to Diablo III. They fixed it. The game itself now absolutely superb and Reaper of Souls finishes the job.