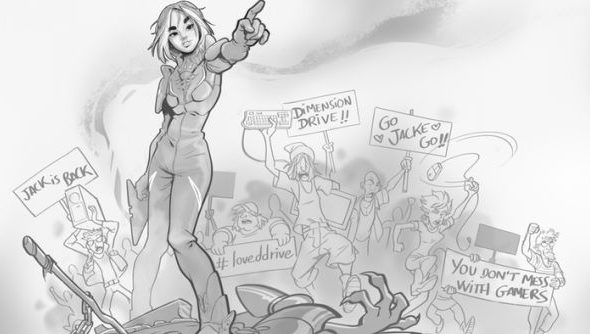 Dimension Drive is an arcade shoot-’em-up with a nifty dual-screen conceit that sees the player’s ship hopping between two separate levels. It made headlines last week as one of the most maddening Kickstarter tales to date: a €7,000 fraudulent donation was pulled minutes before deadline, leaving Dutch developer 2Awesome Studio’s campaign short of its goal with too little time to mount a comeback.

But this sorry story might yet have a happy ending: 2Awesome last night launched a second campaign to see if they can’t convert some of that goodwill to development funds.

After the last minute donation proved false and left Dimension Drive running on empty, 2Awesome spoke to Kickstarter directly. The crowdfunding company were sympathetic, developer David Jimenez told Eurogamer, but unwilling to offer an extension on the campaign. Presumably that would set a tricky precedent.

But Kickstarter did encourage 2Awesome to try again. A new Dimension Drive campaign appeared yesterday, and already has €12,522 of its €30,000 goal covered.

Vlambeer’s Rami Ismail, one of 2Awesome’s most visible supporters, had pledged $1,000 to the cause should the team decide to crowdfund again – so his contribution is in the pot.

I promised I’d eat ramen noodles for a month and spend my salary on the Kickstarter if it came back, so $1K it is. https://t.co/OytDJHAo24

“We decided to come back stronger than ever!!!”, wrote the studio. “Yes we finally decided to relaunch our Kickstarter after everything that has happened over the last days. We will never THANK YOU enough for all your support.”

Do you think you’ll contribute to the new drive? Are shmups your sort of thing?