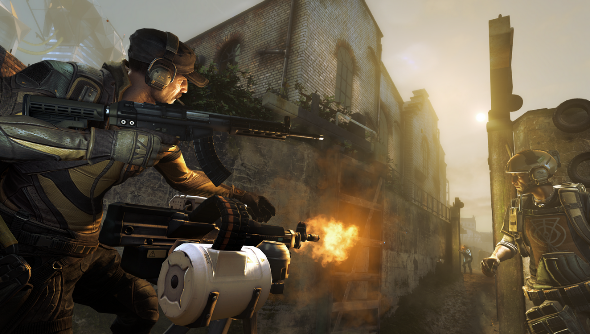 Dirty Bomb, Splash Damage’s team-based shooter set in near-future London, is now in open beta on Steam. If you fancy blasting the claret out of people as they run down the apples to the Underground, now is your chance.

The open beta instantly offers twelve merc characters for play, including permanent characters Aura the combat medic and Skyhammer the fire-support specialist. Other characters will be on rotation, similar to the way MOBA’s handle their champions. The open beta will kicks off with Kira, Sawbonez, and Fragger as free rotation characters.

Also like MOBAs, mercs will be available to purchase with microtransactions, so if you want to play as sniper Vassili or mini-gun using Rhino, you’ll need to stump up. Or just wait for them to come on rotation. Whatever works for you.

Not sure if Dirty Bomb is worth your time? Our Steve wrote a rather positive hands-on of the game, which should help convince you.