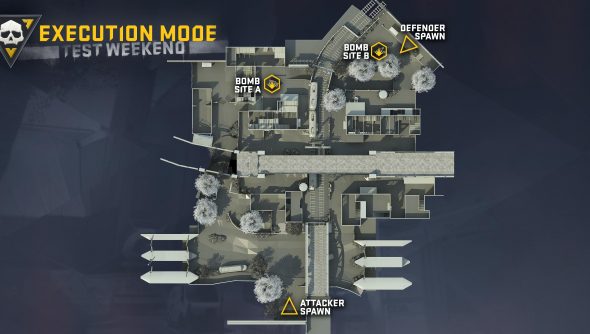 The Dirty Bomb beta train keeps rolling on, intermittently firing shotgun blasts of new modes and mercs into the air. Who gave a shotgun to a train? We just don’t know.

What we do know is that from now until Sunday, Dirty Bomb players can test out a prototype game mode called Execution, on an all new map called Overground.

One attacking team must plant C4 at one of two objectives, while the defending team tries to prevent that from happening. It’s got overtones of Counter-Strike, with no respawns meaning that rounds are snappy and a team’s ability to revive allies becoming vital.

After five rounds, attacking and defending teams swap around and do everything in reverse, until all of the fun is had.

Here’s a video of the mode in action.

The map is called Overground, and Splash Damage are soliciting feedback on both the map and the mode over on their forums.

The game mode slinks back under its developmental duvet on Tuesday, so if you’re part of the beta, be sure to give it a look-see soon.

Here are my thoughts on the Dirty Bomb beta.