Dirty Bomb makers Splash Damage are building to an “aggressive release cadence” since splitting from publisher Nexon earlier this year, where “a lack of support” held the game back from growing faster.

Speaking to us last week, Splash Damage’s marketing director Jeremy Greiner explained that the game’s team has tripled in size thanks to the studio’s new owner, Leyou – a chicken meat company.

For more free games, we think these are the best free games on PC.

Back in February, Splash Damage announced it had bought back the full rights to its free-to-play shooter Dirty Bomb. In the past two months, we’ve started to see the effect of the deal: the studio has released two new maps, a new mercenary, and switched out the old anti-cheat system to one that is much more effective at blocking hackers.

Splash Damage’s Greiner explained to us that the buyback was driven by two things: Dirty Bomb’s development had become “stale” at Nexon, and the money from Splash Damage’s new owner meant it could afford to invest in the game itself.

“There wasn’t a lot of support for the game from either side and with the Leyou acquisition impending” – and the investment capital it would bring – “that really freed up Splash Damage to negotiate with Nexon to take back the rights for Dirty Bomb, to try and give it a second breath of life and really put resources, money, and time behind it.”

While work has been consistent on Dirty Bomb since its release in 2015, Greiner explains it wasn’t always visible to players. “Last year, the team made a big commitment to squash a lot of bugs and increase performance, so that came at the cost of new content as well, which in the public’s eye exacerbated the issue of lack of progress.”

That is now in the past.

Since the buyback in February, Splash Damage’s recent spate of new hires means Dirty Bomb now has more than 60 people working on it full-time. But the proof of the game’s more secure future isn’t in the numbers – it’s in the content released in the last few months.

A new map, Dockyard, was released in May, and then in June, Splash Damage released Turtle and Vault, a new mercenary and a new map, respectively. “[Before that] we hadn’t shipped a new merc in over a year, and a new map in a similar period of time,” Greiner says. “And we have another pretty aggressive update coming around Gamescom as well.”

Separate to new maps and mercenaries, the team is working on a new feature that should make the game more welcoming to new players (and old ones, too): “The team is committed to shipping casual matchmaking this summer,” Greiner says.

“The game has needed casual matchmaking for a long time. For a high-skilled shooter like Dirty Bomb, having people go onto a server browser and having level ones up against level 30s is basically throwing fresh meat to the wolves,” he continues. “That’s not a good experience for a new player. Right now, we have an internal test happening and we’re hoping to have an external one very very soon.” 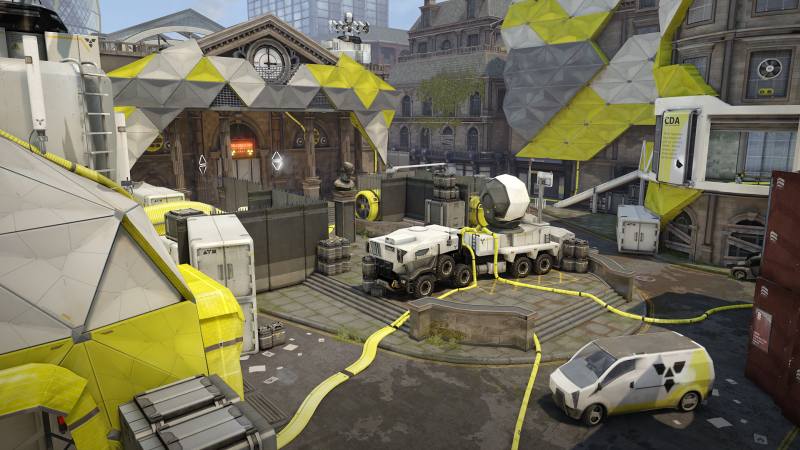 There are new progression systems in the works, too, and the team is going through what has already been released to see what can be improved. With the release of Vault in June, Splash Damage took another map, Dome, out of map rotation “for a full refit” based on what players have been saying for the past year. That should then be re-released later this year.

While Dirty Bomb has already been out for two years, with this new trend of updates and a release on Steam in China due later this year, we could be witnessing a huge a turning point for the game at long last.