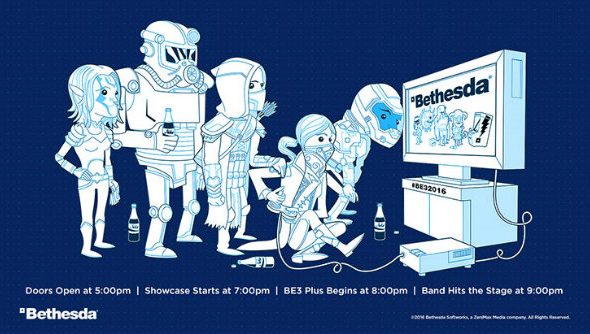 Bethesda, the publisher behind The Elder Scrolls, Fallout, Dishonored, Quake, and Doom series, have announced a new blanket policy for their upcoming games. From now on, any Bethesda-published title won’t be sent out to critics early, but will instead arrive with them on the day before launch, meaning reviews will start to appear in the days after release.

Hopefully you can get the lowdown on some of our upcoming PC games list before launch.

This decision comes after the release of Doom earlier this year, a game which reviewed well despite review code arriving to critics on release.

“At Bethesda, we value media reviews,” Bethesda said in a post tonight. “We read them. We watch them. We try to learn from them when they offer critique. And we understand their value to our players.

“Earlier this year we released Doom. We sent review copies to arrive the day before launch, which led to speculation about the quality of the game. Since then Doom has emerged as a critical and commercial hit, and is now one of the highest-rated shooters of the past few years.”

Bethesda clearly feel they proved something with Doom, showing that a lack of early review copies doesn’t necessarily make for a bad game, or show that the publisher has little faith in a product. With that in mind, they’re going to be continuing this practice going forward.

“With the upcoming launches of Skyrim Special Edition and Dishonored 2, we will continue our policy of sending media review copies one day before release,” Bethesda continue. “While we will continue to work with media, streamers, and YouTubers to support their coverage – both before and after release – we want everyone, including those in the media, to experience our games at the same time.”

Reading between the lines here, it looks like we can expect preview events and the like to continue. You will also likely see streamers and YouTubers with access to Bethesda games before launch – they just won’t be allowed to deliver a critical verdict.

“We also understand that some of you want to read reviews before you make your decision,” Bethesda conclude, “and if that’s the case we encourage you to wait for your favourite reviewers to share their thoughts.”

Of course, you could always pre-order, say, Dishonored 2, and get access to the game a day before launch. With that carrot dangling, I’m sure many will take the plunge.