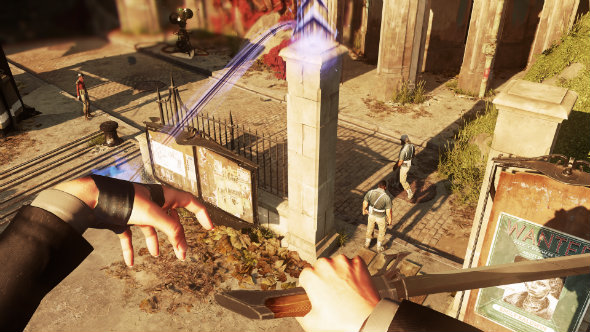 While we’ve seen a lot from Dishonored 2 over the past few months, no one has been able to play it. That changed this week at EGX, the UK-based games show, where Bethesda allowed the public to get hands on with their supernatural immersive sim. Naturally we jumped at the opportunity, and I took Dishonored’s newest assassin Emily for a spin around the Clockwork Mansion.

Dive into a whole new world with a super PC RPG.

Emily and Corvo are both simultaneously very similar and completely different. Her radial equipment wheel contains the things you’d expect from Dishonored: a pistol, a crossbow, a blade, and a collection of special abilities. In the broad strokes, she plays how you’d expect a Dishonored character to: dashing from one area to another, slyly burying swords in the bellies of enemies, and listening intently to the murmurings of a severed heart.

But Emily does possess her own flavour, and it’s deliciously dark. Where Corvo’s abilities feel precise and methodical, Emily’s are more rageful. Shadow Walk turns her into a smoke-like form that crawls around unseen in a manner akin to Alien’s xenomorph. Attack an enemy in this state and you’ll whip them up and tear them in two just like the tentacles from The Darkness.

Alongside this is Domino, which allows you to mark three enemies and whatever you do to one will happen to the trio. Decapitate the guard closest to you, and many heads will roll.

The third and final ability available in the demo is Far Reach. This offers a similar quick-jump mechanic to Corvo’s Blink (albeit with a grenade-like arc to its placement), but can also be used to pull enemies close, grappling hook style.

With three such violent skills, it’s as if Emily hungers for death and destruction in a manner unlike Corvo’s professional hitman approach. It makes me suspect that her story may have a more personal, emotional angle than Corvo’s.

For now though, my objective was the same as if I’d played as the man in the iron mask: enter the Clockwork Mansion, save a prisoner, and assassinate the owner of the house: a certain Kirin Jindosh. He’s a sneering inventor who clearly enjoys mocking Emily as she explores his domain, similar to how The Joker keeps constant watch over Batman as he works his way through Arkham Asylum. 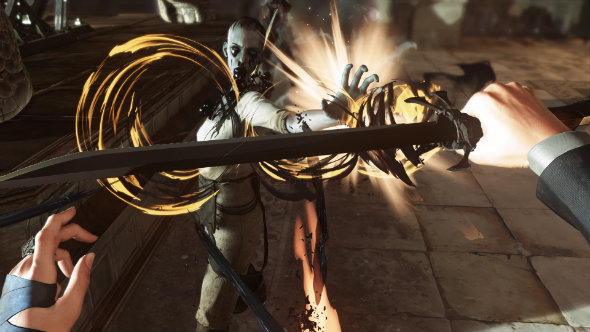 The Clockwork Mansion itself is a piece of level design genius. The entire house is a puzzle, activated by a series of levers. Pull one and the walls and staircases will collapse and re-align themselves, reinventing the area and creating new zones. To reach your objectives you need to force the mansion to re-calibrate and open the correct pathways. And that’s not always the easiest thing to do when you’re hiding from guards, both human and robotic.

Architecturally, this building is stunning. It shows off the new technology at play in Dishonored 2; while still possessing that painted look, everything feels more palpable. It also emphasises the fifteen years that have passed in this world. The clockwork systems in place feel more advanced than anything from the first game. This is also reflected in Emily’s weapons: the pistol is no longer a polished wooden flintlock, but a chunky metal hand cannon that shoots ammunition which crackles and explodes like a deadly firework.

To start my mission, I head into the basement of the mansion to free the prisoner. Doing so requires the walls of the labyrinth to be re-arranged through the use of pressure panels, which isn’t a difficult task but certainly shows off the beautiful design work. With an unconscious old chap slumped over my shoulder, I head up into the higher levels of the house in search of my target. 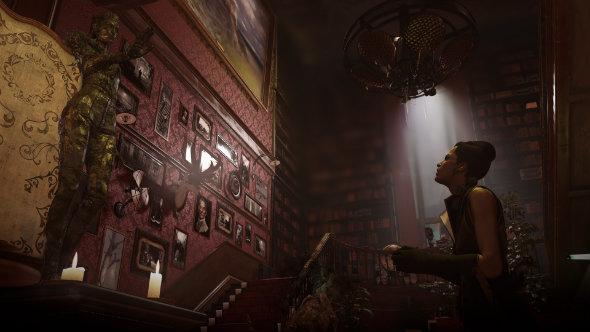 A few brutal kills and a secret door behind a bookcase later, I find myself in a grand laboratory filled with intricate devices and two clockwork guards. Jindosh is here, and while the game reminds me that I don’t have to kill him, his sneering over the mansion’s PA system has me thoroughly enraged.

I use Far Reach to catapult myself across the lab and up to its balcony circle, landing blade-first on Jindosh’s gut. Two extra slices finish him off, and a combination of Domino and explosive pistol bullets leave the clockwork soldiers without the blade arms they need to kill me. I quickly adopt my shadow-form and dive back to the lower levels of the lab, sweep the prisoner back into my arms (I’d left him in a ragdoll heap in the corner, as unconscious bodies tend to hinder my combat abilities), and peg it out of the mansion for a quick victory.

Undoubtedly the Clockwork Mansion will be one of the missions that Dishonored fans will talk about for years to come. After only half an hour with it, it already feels like an iconic place in gaming, and while I opted for the violent approach, through the corner of my eye in every area I spotted perfect positions for a stealth run-through. And with the numerous secret passages and room arrangements offered by this moving palace, I have no doubts that there’s far more to see.

Thirty minutes with Dishonored 2 just wasn’t enough. Thankfully I only have to wait until November 11 to dive back in. And it’s certainly going to be a deep, deep dive.