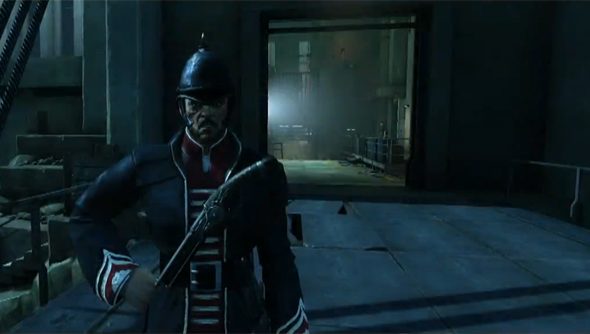 How closely does the name ‘Brigmore Witches’ resemble that of B*Witched, the ‘90s Irish girl group? Not that closely, actually, but just enough that I can’t now seem to claw their songs and freeze-frame-jump promo shots out of my head.

Fortunately, there’s 40 minutes of Dishonored DLC footage to hand with which to flush them out.

In the live playthrough – followed by a panel featuring Brigmore Witches creative director Ricardo Bare and Arkane founder Raphael Colantonio, which I’d advise staying on the line for – Daud is tasked with rescuing a smuggler from Coldridge Prison, which we first busted out of in the opening hours of Dishonored.

Early in the session, Arkane put a question to the assembled throng – should their man at the keyboard sneak in through the sewers, or have Daud’s men waylay an Overseer and take his clothes?*

Naturally, the crowd bellow “OVERSEER”, and when the playthrough begins (at 7:20) Daud walks in the front door of Coldridge dressed as Richard Dawkins’ worst nightmare.

It’s exciting to know that we’ll be using the upper-tier abilities Daud possessed when we last bumped into him as an opponent in the original Dishonored. A new ‘Pull’ power sees Dunwall’s magic hitman able to retrieve keys from across the room and, later on, the guards they’re attached to – before punting them over balconies.

The whole demo has an air of optimisation about it, as Arkane’s man throws his cash about on the upgrades screen, picks and chooses his bone charms for their very specific effects, and invests Runes in the skills he wants to show off. This is Dishonored’s final outing (before its happily inevitable sequel), and Arkane clearly want players to flaunt their virtuosity in stealth, steel and stabbings.

Brigmore Witches’ release date is this time next week. Soon. Are you about ready to face / circumvent its challenges, or is your slow-time elbow pump a bit rusty?

*One of the unique, one-time Favors available at the beginning of each mission.