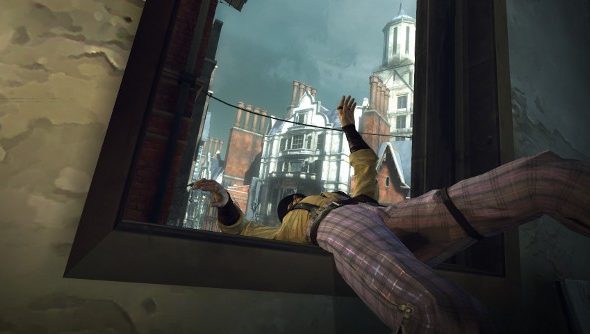 The Knife of Dunwall’s defining characteristic is confidence. Confidence in its setting, the world that Arkane created with Dishonored. Confidence in you, the player, and your ability to navigate increasingly dense and dangerous levels that are as unforgiving as anything in the core game. Confidence in itself, in being able to break free from its predecessor and pursue a story with a character whose fate we already know.

From the outset, we understand that our character, the assassin Daud, is doomed. His godlike patron, The Outsider, tells him as much in the opening scene. He cannot escape what his assassination of Empress Kaldwin has set in motion, and it will be the end of him. But is he damned as well as doomed? It is possible, in this powerful expansion to one of last year’s best games, to find some redemption in the twilight of a long and bloody career. But you still have to face Dunwall.

“Right now I see a man walking a tightrope over a sea of blood and filth. The Empress is dead, and the water is rising.” – The Outsider, to Daud

Daud’s final quest is a Macguffin: he must find out what he can about a woman named Delilah. It’s a testament to The Knife of Dunwall’s storytelling that I overlooked the shaky motivations and implications behind this wild goose chase and still became invested in the missions and the decisions Daud must make along the way. Even by the end of The Knife of Dunwall, I still wasn’t really sure why Delilah mattered. It’s not really the point: Daud’s crisis of conscience is the real stake here.

Daud, a gifted killer with a band of assassins behind him, is not simply a Corvo clone. He may not be able to possess people like Corvo could, but he can summon assassins into battle alongside him and freeze time as he uses his blink ability. These are not huge differences, but they don’t have to be. Daud is both novel and familiar, a good protagonist for a game like this.

That combination of novelty and familiarity extends to the missions, which include some new locations in Dunwall that more firmly establish the city’s history and character. Dishonored showed the mysterious power of whale oil and how the inventor Sokolov was radically reshaping the world; here we see the ugly sources of that power. As Daud investigates a whale processing plant, you’ll find cruel experiments, see the bloody and dehumanizing work of butchering the whales, and get caught up in a deadly labor strike. 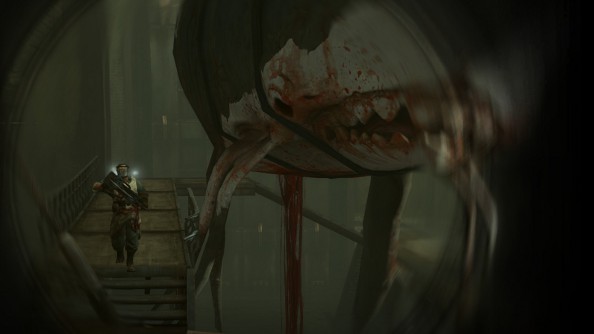 The levels themselves are not just dense with detail, but also opportunities and challenges. I probably spent about nine or ten hours on The Knife of Dunwall, lingering over each mission and scouring them for secrets and clues. On the first mission, after a long and painstaking infiltration, I realized I’d come about seventy-five yards in forty minutes. I’d been so intent on my task, and the dangers were so numerous, that crossing a wall and a factory yard had felt like a journey of a hundred miles.

It was in that factory, as I watched a union-busting Butcher carve up another worker with a circular power saw, that I lost my resolve to turn over a new leaf. I’d wanted to do a clean run, to play Daud like someone who really has lost his taste for bloodshed as he lives with his guilt over murdering the Empress and kidnapping her daughter. 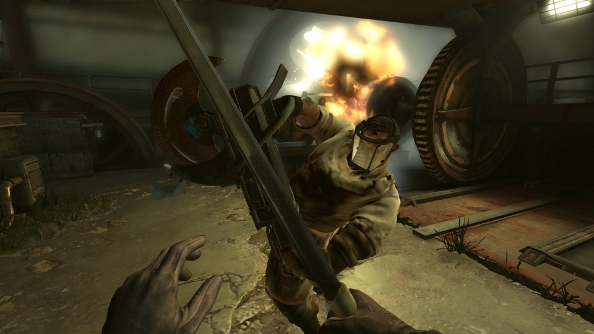 But these new enemies were malevolence incarnate, killing and maiming with such evident glee that it seemed unconscionable not to act. Deciding to be vengeful rather than tidy, I quietly slaughtered most of the Butchers in the plant and their boss. It seemed justified, but came with some appalling side-effects. By the end of the mission, I was reminded how good Arkane are at creating a game whose setting is not only brutal and corrupt, but which compromises the player as well.

That palpable sense of moral decay and sorrow in the city of Dunwall is down to Arkane’s excellent writing (supported by outstanding voice work, particularly from Billy Lush as The Outsider and Kristy Wu as Lurk, Daud’s right-hand woman). The books, notes, and audiographs in the Knife of Dunwall tend to be longer than in Dishonored, but the extra space is put to excellent use. I listened to one lengthy exchange between a guard captain and one of his men as they made plans to evict a family, using plague laws as justification. The soldier protested, saying that these people had always been good to him in the past, and he wanted no part of throwing them into the street just for a share of the seized property.

The captain’s final comment, after a callous and hard-hearted tirade, spoke volumes. “I used to call myself brave, Simmons. ‘Til I saw a man lose a fight with a pile of rats… There’s no room for heroes in the time of plague.”

For my first five or six hours with Knife of Dunwall, I felt it was very nearly perfect. I was ready to argue for giving it our highest score. But the third and final level, plus a couple frustrating glitches, gave me some reservations that I can’t quite shake.

First, I had a very odd bug that crashed the game about a half-dozen times on the third level’s loading screen. I found a remedy on the Steam forums that’s as arcane and perplexing as one of Granny Rags’ recipes.

But it was the third mission, The Surge, where Knife of Dunwall’s confidence turned into over-confidence. It reuses Daud’s hideout in the Flooded District, which is not a problem in itself, but The Surge is exasperatingly difficult and obscure. 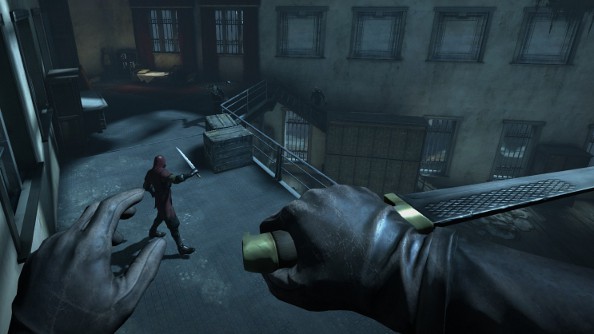 In a game that places such importance on the quantity and nature of the violence you perpetrate, The Surge’s legions of armed guards and sentries are an almost cruel obstacle to any attempt at completing a low-chaos playthrough. It’s so crammed with enemies that it becomes the stealth-game equivalent of the Gordian Knot. I eventually pulled it off, but I felt like I was forced into adopting a quicksave-heavy play style that sapped the level of its tension.

Part of the problem is expectations. Dishonored showed us that a less bloodthirsty, kinetic playthrough is the road to a happier ending, which also implies that this is the “correct” style of play. A serious stealth game has always been a test of skill, but Dishonored and Knife of Dunwall both have a knack for making stealth feel mandatory. The trouble comes when you hit a level like The Surge, which is clearly aimed at trained game-ninjas. You can either lose your mind memorizing patrol routes, abuse quicksave, or stack the bodies up like cordwood and let the game judge you harshly for it. 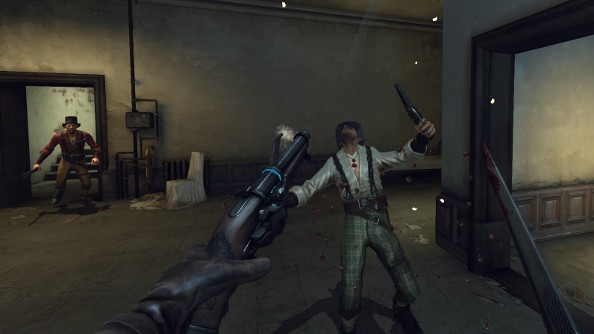 The payoff for all of this, by the way, is a sort-of “to be continued” ending. While Daud’s story will be concluded with the upcoming Brigmore Witches, the Knife of Dunwall tries to split the difference between being self-contained and setting up another mini-campaign. It’s unsatisfactory compared to the narrative cohesiveness that characterizes the rest of the campaign.

To be clear, these were blemishes on an otherwise outstanding experience, and I wouldn’t even go so far as to say I actually disliked the last level. I was simply frustrated, and a little disappointed that it didn’t quite live up to the quality Knife of Dunwall exhibits in its first two missions.

The Knife of Dunwall gets just about everything else right, even the details. Its saves are stored separately from the main campaign, so you don’t even have to worry about it overwriting autosaves. It even launches into its own title screen, further underlining the fact that it exists separately from Dishonored. 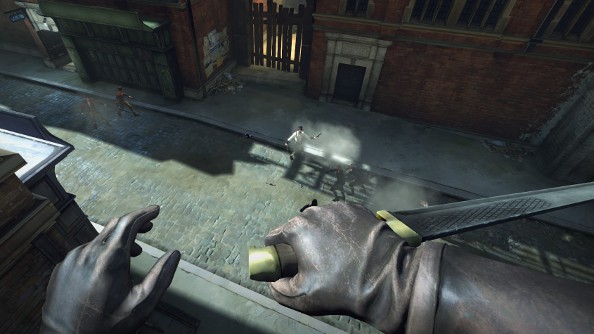 Meanwhile, Dishonored remains an example of a PC port done right. The generous field of view options (85 – 110 degrees) should make just about everyone comfortable, and it looked great at 100 degrees. More importantly, I love how Dishonored empowers players to choose how many interface elements they want, if any. I eventually got rid of all of them, which made me tune in more to Dishonored’s subtler, diegetic cues.

The Knife of Dunwall is a superb addition to Dishonored. Playing it deepened my appreciation for its accomplishments and left me looking forward to what other stories Arkane will explore in this series. Daud’s story may be nearing its end, but Dunwall and Arkane seem like they have many more to tell.