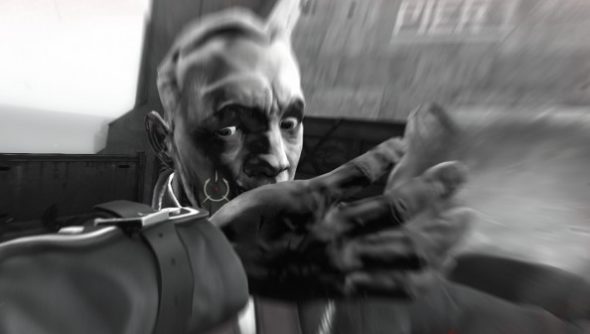 There is this scene in Unbreakable where Bruce Willis’s awakening superhero, David Dunn, stands in the center of a train station and lets the crowd buffett him. With each touch, he sees the crimes perpetrated by the people around him. He eventually discovers a killer in the crowd, and sets off to stop him.

But what stays with me is all the crimes he let pass. He stood in a sea of malignance, letting thieves, thugs, and rapists go free. I always wondered how he could do that.

I thought about that scene a lot while I played Dishonored, with The Heart in Corvo’s left hand and a blade in his right. The Heart knew the antecedents of each character we met, and what their future held. The news was rarely good, and usually left me with a choice. Did I spare this person, this monster in guard’s clothing, or did I leave another dead body on the streets of Dunwall?

“Unless he dies tonight, he will kill twice more before he ends his own life.”

“This one has kept a lock of hair from everyone he has ever killed.”

“When his cousin refused his advances, he sent a patrol to beat her to death.”

When I first started playing Dishonored, I was more concerned with my performance. I wanted to pass as stealthily and bloodlessly as possible through each level. The old admonition I’ve carried with me since Thief, violence is the mark of the amateur, stayed my hand against the innocents and noncombatants that surrounded me.

The Heart changed all that. Within this world, Corvo had the opportunity and ability to stop murderers and predators from committing further atrocities. These characters may have been nobodies, just background goons and gunmen, but suddenly each one seemed to pose a dilemma. I’d be crouched on a garden trellis above a sentry, ready to make a smooth and undetected entry into an upper-class cathouse, and then I’d hear The Heart tell me, “He once killed a man just for a change of boots.” It occurred to me that this is why Corvo must remain a silent protagonist, why we don’t get much insight to his thoughts or feelings. His decisions are not like a Commander Shepard’s, who is called time and again to the galactic stage to render another Solomon-like judgment on the fate of races. Corvo must instead make hundreds of small decisions that will have no visible impact on the world and which will never be known by the world at large. Does Corvo spare the brutal bully but quietly slaughter the serial killer? Does he simply harden his heart at everything that surrounds him and focus on the mission? Now that he has the capacity to read people’s pasts and futures, doesn’t he have some moral culpability for everything that will follow?

Fittingly enough, it is impossible to keep one’s hands clean in Dishonored. Even mercy and restraint can become tools for a greater evil, if you simply pay attention. I spared two foppish aristocrats from assassination, only to discover I’d consigned them to a lifetime in a hell that would make Stalin’s gulags look like a Siberian vacation. I killed one victim because, while she had to be removed from the board if I was to bring down the Lord Regent, the “nonlethal” option sounded like it made Corvo an accomplice to rape.

What do you say to something like that? How could Arkane write lines for Corvo that could reflect the inconsistent, confused morality I staked out for myself in my journey through Dunwall? In the final stages of the game, when my enemies were falling like leaves on a silent breeze, I’d come to a point where there were scarcely any lines left to cross. My Corvo began as a pragmatic professional and ended as a zealous crusader, an arc that took place entirely in my own head. Dishonored became a game about what I could live with, a balancing act between moral vanity and damnation. I saw the stakes reflected not in the “chaos level”, whatever that meant, but in the increasingly conflicted members of the Loyalist Conspiracy. Having unleashed Corvo and handed out their death warrants, they grow ever more convinced that they’ve been party to something unspeakable. Yes, they’ve been battling a coup that assassinated the rightful empress and stole her little daughter, but somehow it seems… ungentlemanly. Dishonorable.

The real plot twist for me came at the end, when I found out just how completely one character’s vanity and guilt drove him to madness. Corvo might be the one carrying The Tell-Tale Heart, but at least it forces you to shoulder responsibility for the choices you make, and even the ones you avoid making. The Heart strips away all illusions.

The true villains of Dishonored are the ones who believe they can be a party to evil and yet still remain aloof from it. Their greatest crimes are committed in those moments when, having at last become aware of their own savagery and ruthlessness, they kill to preserve the lies they told to others, and most of all to themselves.

I don’t think my Corvo ever regained the honor that was stripped from him by the assassination of the Empress. But by the end, honor had become just another coin without value. We’d try and make do with decency, instead.