Dishonored 2 is in development at Arkane, according to somebody with a photo of a TV screen. That’s not entirely a surprise: since Bethesda’s Pete Hines started making positive noises, an Arkane-developed Dishonored 2 has been the worst kept secret since “Corvo didn’t kill the Empress”.

What’s more surprising is just how soon it’ll be upon us. The photograph indicates that we should expect a “full reveal” at E3 in June this year.

The image was sent as an anonymous tip to JustPushStart, who don’t have any way to check its veracity. Still, looks legit: an updated, roman numeralled logo on one of those tilted TV screens you tend to get dotted around private events. 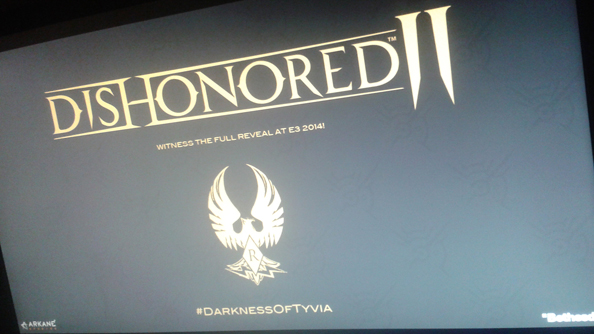 The hashtag reads #DARKNESSOFTYVIA, in reference to one of the regions in Arkane’s fiction that lies outside of Dunwall’s, ah, walls.

Tyvia is the northernmost island in the Empire of the Isles, and the various related books scattered about Dishonored described harsh terrain and a cold climate.

The locals are skilled survivalists, but also cooks, whalers, winemakers, and artists. It has at least seven trade hub cities for Arkane to pick from, all boasting the sort of “ornate and complex” architecture and fashion to make the most of the studio’s talents.

In short, Tyvia is perfectly primed to become Arkane’s next stop after Dunwall. The switch to new climes is in keeping, too, with the tone of Dishonored’s DLC entries, The Knife of Dunwall and The Brigmore Witches: they made much of Corvo and Daud’s shared background in distant Serkanos.

Bethesda’s word on this? “We don’t comment on rumor and speculation.”

Especially not when it’s the good kind, eh?