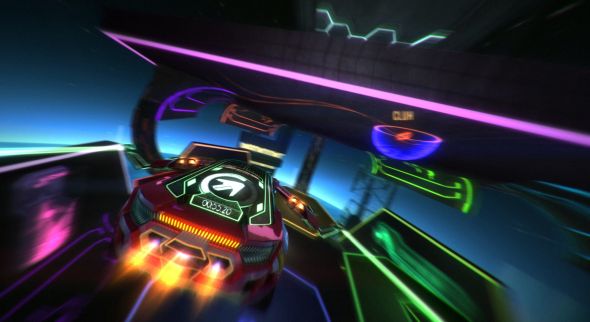 Distance feels like a lot of different games. It’s a racing game that’s built like a platformer, with acrobatics reminiscent of Rocket League, and levels that look and sound like something out of Thumper. Yet the indie game, currently in Early Access, predates them both.

Distance evolved from another game, Nitronic Rush, which developers Refract’s initial team created when they were students at DigiPen Institute of Technology – a game design college in Redmond, Washington. That game, according to studio founder Jordan Hemenway, was “essentially a combination of Tron Legacy and San Francisco Rush 2049,” a chaotic racer released in 1999 for the Sega Dreamcast.

According to Hemenway, Nitronic Rush was “100% insane neon, super-cheesy,” with a generic sci-fi adventure to work through. When the team started work on Distance, though, it quickly evolved. “When we came into Distance my main goal was to have some sort of atmosphere at all moments permeating everything and think ‘how can we use lighting better, how can we use shadows better, how can we make it feel like it’s a real world despite the fact that it’s clearly a bit of an abstraction of reality?’,” Hemenway says.

The game’s story mode – a 90-minute adventure with a focus on environmental storytelling and getting you up to speed for the multiplayer – definitely captures that atmosphere. Starting from roads that weave around the tops of skyscrapers, Distance wastes no time in taking you to its world’s grim underbelly, the lights going out on a neon utopia to give way to a threatening, unsettling world beneath. 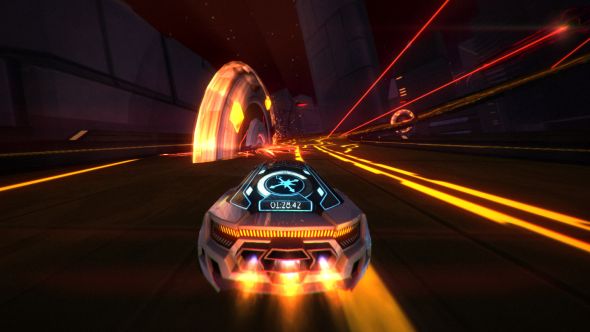 At the beginning, you can only drive your four wheels along the track, boosting to make it over larger gaps in the road. Soon after, the ability to jump is added, and it’s not long before you’re literally flying, twisting and turning around the city. It’s not the easiest game to get to grips with, but within an hour I was starting to feel a lot more comfortable behind the wheel, whether steering across road or sky. Experimenting in the game’s stunt mode is a great way to explore all the tricks at your disposal, too.

The best of Distance, however, comes from its multiplayer. Steam Workshop support has been a priority since the earliest stages of development, motivated by the creations of Nitronic Rush players once got their hands on the game’s level editor. Hemenway says Refract look to support their community as much as possible, and actually hired three community level editors earlier this year. Those were players pushing the level creation to its limits, and Hemenway says, “they were all creating their own universes. They really put a lot of time and effort into deciding how the world should look and feel.”

Distance’s community success seems to stem from its ability to provide something for everyone. Racing enthusiasts look to Sprints, 12-player races which evolved from traditional races to “live ghost racing, where there’s no collisions and it’s really all about skill.” Speaking of Sprint, a speedrunning community actually evolved from it, in which players use their cars’ jumps, boosts, and wings to entirely forgo the road, finding the quickest route from A to B. For more casual players, there are the arcade and stunt modes, allowing you to play around within the worlds the community creates.

Distance is, by Hemenway’s own admission, a racing game that’s for people who haven’t previously enjoyed racing games. He says that he regularly receives feedback from players who say, “I don’t like racing game, but I really like this.” The reason for this, he says, is because “it’s more of a platformer than a racing game, to me. It’s more tactile, but at the end of the day we are using platformer game design, which is something that a lot of people didn’t realise they wanted.”

Distance takes the bones of a racing game and then lets players decide what flesh and skin to wrap around it. That there are thousands of courses available already, with more being added constantly, is proof that this community-driven approach to building a game has worked. In a genre that has for years been dominated by a simulations, Distance, along with Rocket League, shows there’s plenty of room for something looser, a little sillier, a place to mess around with rocket-powered cars. With the game settled comfortably in Early Access, the aim for the future is to continue to build on Distance’s already strong foundations, and see how wild a racing game can be.