Crowdfunded RPG Divinity: Original Sin’s getting a sequel, and once again developers Larian are taking to Kickstarter to make it happen. Among screenshots that are so beautiful I literally can’t stop going back to look at them, are promises of 4-player competitive/co-op multiplayer, new dialogue and crafting systems, and more.

The key narrative theme in Divinity: Original SinII is that your race and class determine your path. Or, as Larian put it: “the chances you get in life.” No pressure when you’re building your character, then. Try not to think about all the possible life-ruining disadvantages you’re giving them and it’ll all be fine.

You’ll be able to have up to three companions tagging along on your quest, each of whom can be inhabited by a player in the game’s 4-player competitive and co-op multiplayer.

How does competitive questing work? Good question. Apparently each of you will be pursuing your own quests, not least because they’ll often conflict with the party’s goals. There’s no obligation to compete though, say Larian. 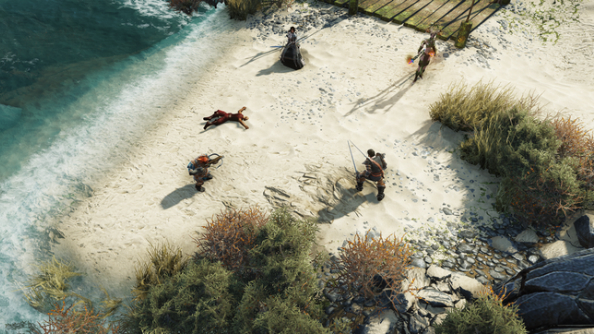 Divinity: Original Sin II’s revised dialogue system will offer different lines depending on who’s talking – like almost every line, consistently throughout the game. In addition, a new crafting system and ‘skill crafting’ are added, the latter letting you combine spells and skills to create powerful new ones.

There’s a lot more planned in the sequel too, but Larian’s already working on fine foundations – the original (sorry) Divinity: Original Sin makes the cut in our best PC RPGs ever.

And I’m not sure if I mentioned this before, but have you seen those screenshots? Crikey.