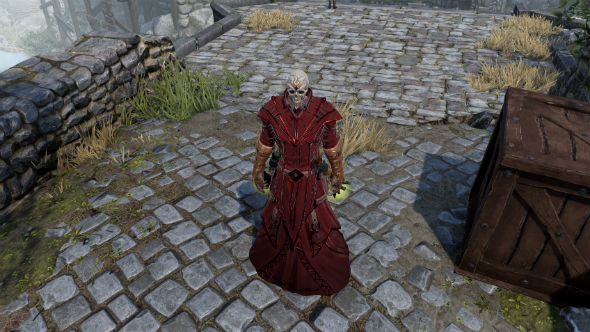 There’s a moment in every great game where you totally fall for it. For Divinity: Original Sin II, that moment manifested itself in my introduction to the rather brilliantly named Face Rip-off ability, which lets you tear the face off any corpse and, after some basic crafting, wear it like a mask. Soon after that, I’m chatting to a dead bull who is doing a pretty subpar job of predicting my future. By this point I am utterly smitten with Larian Studios’ ludicrously ambitious sequel.

Interested in another aspect of the game? Check out our impressions of Divinity: Original Sin II’s Game Master mode.

Context is important here. There are four races in Divinity: Original Sin II, but you can also play the game as an Undead variant of any of these races, like Fane, the new character in the demo I was shown at Gamescom 2017. Fane is a humanoid character from an ancient race called the Eternals. He’s spent the past few hundred years in a tomb, and after killing and eating his rescuer – a kindly dwarf who was mining in the area – Fane has emerged into a very different world from the one he left behind. After having spent so long underground his flesh has also totally rotted away. The lack of a face isn’t normally an issue in Divinity: Original Sin II, but as my parents told me during my teens, you can’t go through life with your hood up. 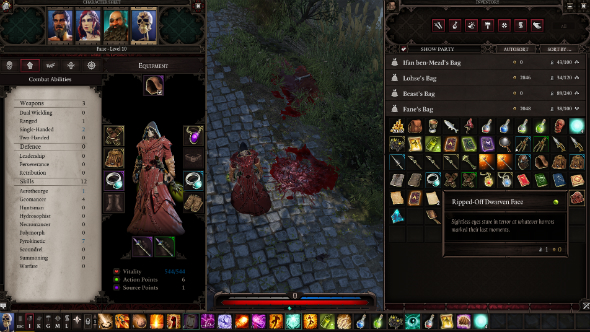 Which brings us back to Face Rip-off and why Fane is using it. We open the demo on a grizzly scene: a caravan on its side, traders left slaughtered by the roadside, not even the bull’s life spared. To find out what happened, we can ask around at a local town, but they won’t let a skeleton in. Solution: we pull the face off a deceased dwarf, which we can then combine with a Shapeshifter Mask to fully transform Fane’s appearance into that of the dwarf whose face we nicked. To do that, however, we’ll need some rare Source Points.

A new ability in Divinity: Original Sin II, called Spirit Vision, lets you see and chat to ghosts. When combined with the Pet Pal perk from the first game, Spirit Vision even lets you talk to ghost animals like the poor, spectral bull. Unsurprisingly, the bull doesn’t offer much help, but by using Purge on the bull we can gain a precious Source Point at the cost of doing something extremely evil: robbing the poor animal of its soul. Evil deed done, Fane can now cloak himself as a dwarf and enter the nearest township.

Larian Studios founder Swen Vincke points out that had we been playing as an elf then we’d already know what happened to the deceased traders. That’s due to their incredible ability to absorb memories by eating the dead. But we’re not an elf, we’re Undead, so we’ve got some extra hurdles to overcome before we can learn what happened to the fateful caravan. Spoiler alert: we get sidetracked too many times to ever find out. 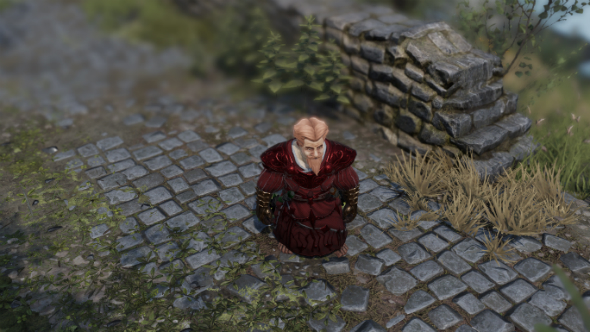 Anyway, back to the nearby town where our party is immediately accosted by a magistrate and faces questions about a previous incident involving a drunken wolf summoner. Ifan, a human member in our party, is the guilty subject, and in an attempt to avoid capture, he unsuccessfully offers the guard a sizeable bribe. We select the highest value of four potential bribe amounts. This backfires spectacularly, causing the guard to become even more suspicious and decide that letting Ifan past isn’t worth getting strung up for.

Ifan is now in prison. You can probably see now why we never find out what happened to that caravan. In fact, forget about the caravan: turns out Ifan can summon a magical cat.

The handy feline – which Vincke assures me is an absolute pain to get hold of and keep alive until this point in the game – can slip by the prison guard unnoticed. As it is magical, we can possess the cat and slink away unharmed. Unless, that is, you get overconfident like Vincke did and leave your feline host prematurely, at which point you get to have another go at bribing your way out of trouble. Vincke goes for the Goldilocks pick of 50 gold and we’re good to go. 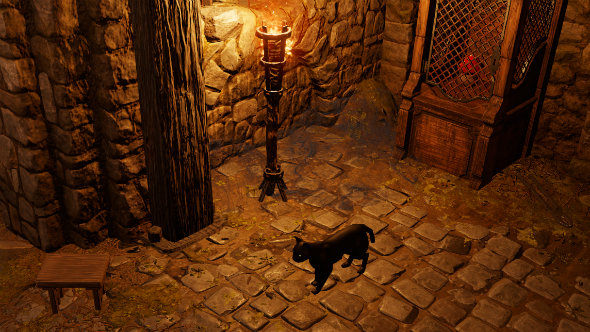 The next location on our whistle-stop tour of the township is a the chief magistrate, who Vincke tells me can help us figure out how the caravan massacre came about (forget it, we’re not reaching that conclusion). Immediately, we’re given a new quest (told you), which sees us attempting to figure out who keeps killing all the other magistrates.

Vincke knows who the killer is and so, in the interest of time, we head straight to the home of an elf cook, who has been killing all the magistrates who have wronged her. Again, had we been playing as an elf ourselves, we could have stumbled upon this secret by eating some stew in the town’s central hub – memories of the murdered magistrates would be revealed by the fact that their chopped up remains are in the stew. In this playthrough, however, we’re reliant on Vincke’s knowledge of the game to find the culprit. Proving it’s the elf cook so that we can get a reward from the chief magistrate is the next step, and it’s here where things get needlessly complicated in all the best ways.

We need to steal her hit list/recipe. To do that we need an adept thief, in this case, our dwarf (not Fane) will have to do. If we manage to get hold of the list, we don’t want her to realise it’s missing and then quiz whoever she can recall seeing recently. We need to trick her. Enter Fane, the second dwarf, with some neat timing. Vincke performs the notorious switcheroo: he steals the hit list with the thief and then moves Fane into the room while bringing the thief out. The elf cook notices the hit list is missing and so, naturally, accuses Fane, as she can recall seeing a dwarf nearby. Fane submits to a full body search and the elf cook finds nothing, easing her suspicion and letting the whole party escape scot-free with the all-important evidence. 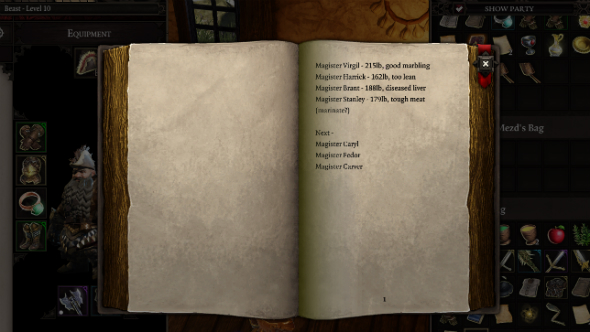 Vincke lets me in on a much simpler method: you can just kill her the second you get the hit list – leaving her alive really doesn’t add much to the equation. But it’s the fact that you can go to such extreme lengths in Divinity: Original Sin II that makes it so exciting. Doubtless, the next step would be to use Face Rip-off on the elf cook, setting off an even more complex chain of events based on this new identity – that’s the RPG dream – although exactly how deep this mechanic goes remains to be seen.

Mechanics and abilities like this don’t fundamentally alter what Divinity: Original Sin II is, but they do add to the already expansive set of options, playstyles, and roles that you can assume over the course of your playthrough. The sheer breadth and depth of solutions is mind-boggling. Undead races and characters like Fane only add to this, fleshing out an already comprehensive questing simulator and helping to cultivate the same sense of freedom you would expect from a pen-and-paper RPG. Oh, and about that caravan … damn, we’ve hit our word count limit. Sorry.