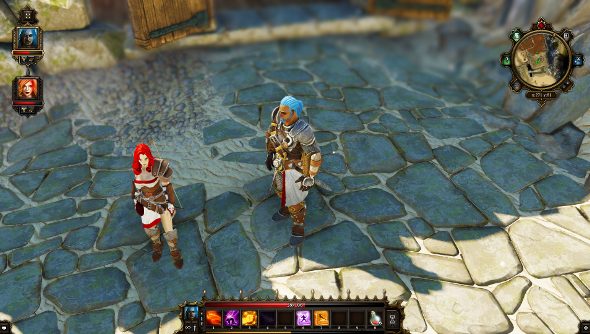 After a slight delay, Divinity: Original Sin has now left Early Access and has officially launched. After not touching Larian’s tongue-in-cheek fantasy RPG since the days of alpha, I dived in the moment it left the land of pre-release behind.

Since the review is a wee bit away, here’s some of what I’ve been getting up to as I take my first steps on the well-worn path of adventure.

I’ve been setting an awful lot of fires. There are oil pools, flammable gases, flammable people and explosive barrels by the truckload, and as a spellcasting chap, I’ve been making sure to keep the fires stoked throughout the world. Sometimes that means setting fire to my companion, or even myself. But it’s worth it in the end.

I tried to befriend a clam. It was a talking clam, and not just because I have the ability to talk to animals. It could talk to anyone. All it wanted was to be flung back into the ocean, and I was happy to oblige. My companion, who I don’t see eye-to-eye with, wanted to sell the clam instead. She won the argument. She’s a terrible woman.

I met a guard who had fallen in love with an orc. The silly fellow had inadvertently doused the creature in a “love” potion, though it seemed more dumbstruck than anything. I talked his chum into letting the creature live, because who are we to get in the way of true or magical love? My companion disagreed again, because she’s awful.

I got propositioned by an elderly man, but all he wanted to do was get revenge on a woman.

I cried for ten minutes.

My companion attempted to strike up a conversation with a cockerel that was being painted. It told us both off for breaking its focus. Cocks are pretty rude.

So mainly I’ve been chatting to very odd people punctuated by moments where I use telekinesis to move objects; sometimes for laughs, sometimes for important adventuring reasons. I’m obviously having a rather splendid time. It’s basically Divinity: Drunk Ultima, and I’m very much down with that.