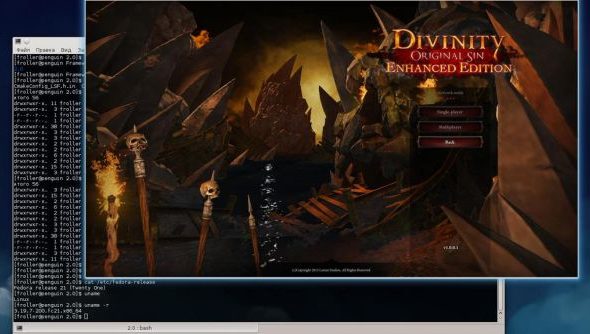 Because it’s 2015 and nobody needs a website any more, Divinity devs Larian boss Swen Vincke today announced via a picture on twitter that the Enhanced Edition of Original Sin will ship with Linux support.

The Enhanced Edition, first announced earlier this year, is a free update for everyone who owns the game and a full re-release on consoles and PC. The improvements were originally intended to be mostly graphical, but over the course of development almost every encounter has been changed. There’s even updates to the dialogue and additional voice acting has been recorded. Now it’s even being ported to additional OS’.

Meanwhile Larian are hard at work on Original Sin II, which launches on Kickstarter late this month, as we found out yesterday. Larian have described it as so ambitious and back-breaking that it will either sink the company or be their crowning glory. Let’s hope for the latter, with the double-dip on Kickstarter letting them continue to be mostly independent.